Phony Add-on for Firefox on Android allows you to open different versions of websites right from your Android device. Phony has the option to open Android tablet, iPhone, iPad, Microsoft IE, Desktop Firefox, Desktop Chrome, Microsoft IE, and Lynx versions of websites on Android. The Add-On has a very easy-to-understand interface and it applies the changes when you restart Firefox. The next time, you just have to browse to a website the way you would usually do, and Firefox will now show you the layout meant for the browser you selected in Phony! 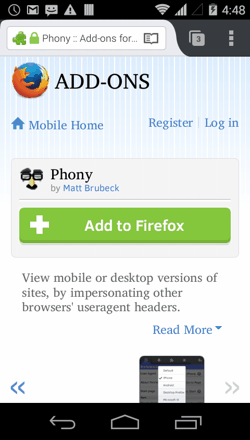 How to Open Desktop,  iOS or Lynx version of Websites in Firefox for Android? The Answer is Phony.

Phony is an Add-On specifically built for Android Firefox which allows you to open several versions of websites right on your Android device. Suppose you are not near your PC and need to open a website in the way that it would look on a PC. Or maybe sometimes you would want to check the way iOS users can perceive certain websites. The only Add-On you need for that is Phony for Firefox Android. 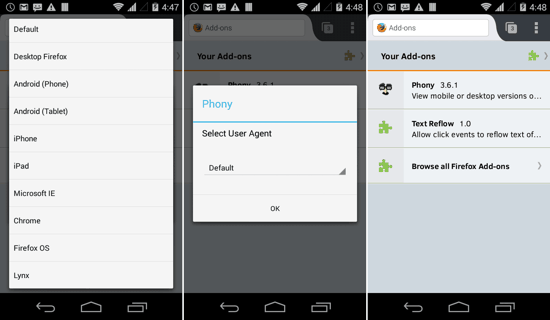 Once you install the app, you need to open it by tapping the 3 dot menu button and then selecting ‘Phony’. You will see the drop down menu for selecting one of the available User Agents. Once you do that, you only need to close Firefox, clear it from your Recent apps, and launch it again.

When you will launch Firefox again, you can browse to websites and see the content in the way it will be shown on the Browser User Agent that you had selected. Simple, Isn’t it? 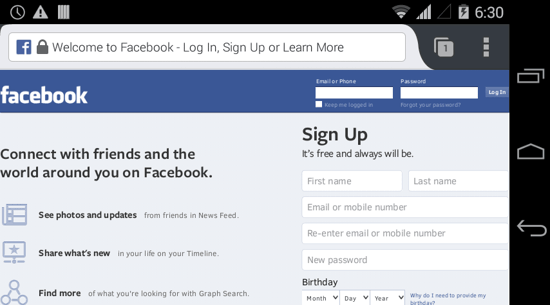 As you can see in the screenshot above, I set the user agent as Desktop Firefox, and then closed Firefox. Then, when I did launch Firefox again, I browsed to Facebook and Firefox in fact opened the desktop version of this Social Networking website.

And by the way, if you want to open the other versions of website on Chrome Browser for Android, you can read this article here!

The Add-On is simple to use and has nothing in the form of so-called User Interface. You just need to download it, set the User Agent of your preference, and you are good to go! The layout change is also pretty instant and doesn’t really affect the performance of the Browser. There are certain layout problems with some heavy desktop websites, but that might be more of a one-off incident. You can get Phony from the Firefox Add-Ons Store for Android. The link is right below.

Get Phony Add-On for Android Firefox