Flight Theory, is a free Windows 8 flight simulator game app. Flight simulator means that it copies all the situations that goes on when you start the ignition, take off the flight, fly in the air, and then safely land on the runway. The gameplay is pretty simple. All you have to do is control your plane, so that you can land safely on the runway after the long flight. Well, there are different locations where you have to fly and then land safe and fine. And if you stall, then as obvious your plane will crash and you have to restart the mission again; which is to land safely. There are multiple levels that are free in this Windows 8 flight simulator game app, and if you liked the game, then you can unlock more planes and locations, by buying the pro version for few bucks. The game play is sure fun, specially controlling the plane. So, this is a must have Windows 8 game app for all the plane games nuts. 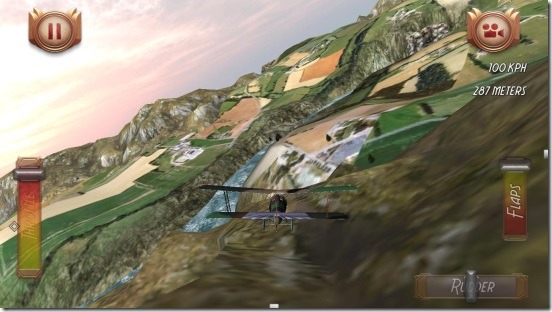 Playing this Windows 8 flight simulation game app is sure fun. But some might find the game slow, because of the speed of the plane. At first it looks like it’s flying too slow. But you can actually increase it’s speed, by going up to a safer height and then diving towards the land till a safer distance from the land, and then tilt the plane nose up again. Doing this twice or thrice, does increases your plane speed. Which is what happens in actual life. The game is in 3D and the graphics are fine. But it’s the game simulation that makes this Windows 8 flight simulator game app fun and lot more challenging. The game has a very good real world like simulation. Which makes it quite difficult to control the plane, specially while turning to a direction, so that you can reach to the runway. And the most difficult part of the game is to land the plane right on the runway. Because of the simulation it becomes too hard to land your plane safely on the runway. There’ll be multiple instances when you are so close to runway, still you can’t land it safely. And have to throttle again, pass through the runway, take a turn and then try again. 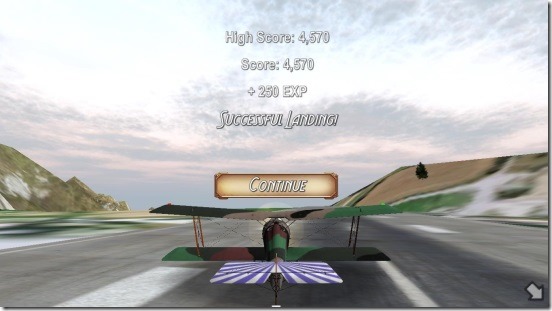 However, if you are having difficulties with the simulation, then you can also change them, by pausing the game (click on pause button at top left corner of screen during gameplay), and the dragging the Tile Sensitivity slider as per your comfort. Pausing the game actually brings out the settings of the game, where you can change the speedometer unit, set the sound to mute, and recalibrate the tile, or quit to the Hangar; which is the main screen of the game. 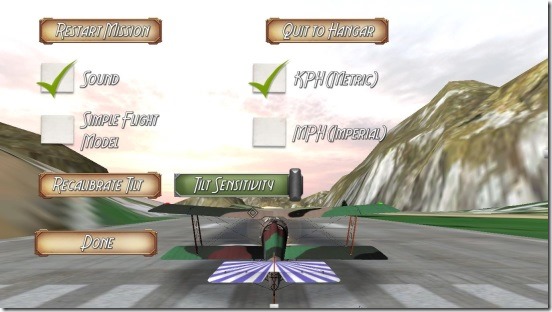 The game controls are easy, use the up arrow key to tilt the plane’s nose up; so that you can go up, down arrow key to tilt nose down, left arrow key to turn left, and right arrow key to go right. The turns are not instant and in fact, takes time to turn. However you can make the turn a bit faster, by pressing the turn arrow key and then press the up arrow key. This makes the turn quick, just like in real life. Also you have to manually control the Throttle and Flaps. There are sliders for both on each side of the screen, use the mouse click-drag to control them. A good thing about this Windows 8 flight simulator game app is, it also has an inbuilt tutorial video, that tells you everything about taking a safe takeoff, flying safely and finally landing without any problems. Also there’s a Rudder slider, which is used when you are on the ground. 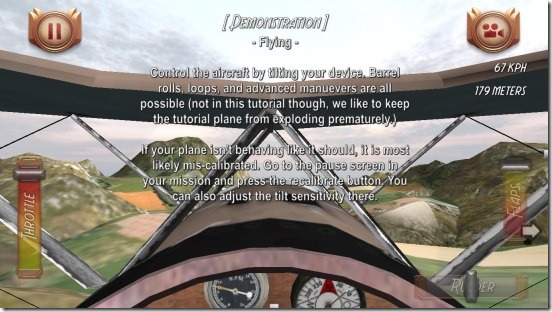 The speed and the distance from the land, are shown at the top right corner of screen. These two are very important factors and helps you in a safe landing. Also you can change the camera of the game. Simply click on the camera button, present on top of the aforementioned speed and distance readings. 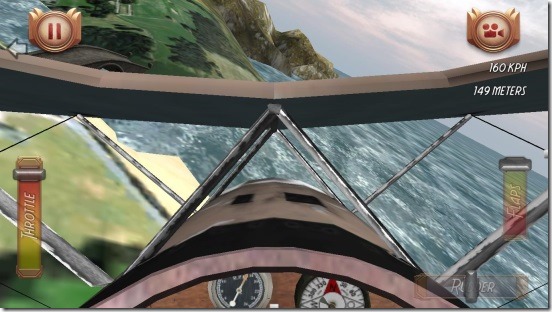