Game About Squares is an insanely fun and addictive square based game. Playable directly from your web browser, it seems to be the perfect way to waste your time.

While the game itself is quite simple, the gameplay isn’t.

Game About Squares basically involves randomly placed different colored squares, along with an equal number of different colored dots strewn just as randomly on the screen (Essentially, this means that corresponding to a square of a unique color, there is a dot of the same color). Each of squares has a directional arrow on them, and your objective is simple: Cover each dot with a square similarly colored as itself. The game can be easily played via your mouse, and is divided into a total of 36 progressively difficult levels. Ready to kill some time? Head past the break to find out more.

Note: Before getting started, it’s important to know that Game About Squares saves your in-game progress using browser cookies. So you can easily stop playing the game at any level, close the browser and start playing again from the same point where you left, provided you don’t delete your browser cookies. If you do that, the game will reset to level 1.

Game About Squares is just about as simple as its name and objective. There are no signups, no accounts, no setting up of controls, or anything like that. All you have to do is just go to the game’s homepage and start playing. Here’s how the game’s user interface (if it can even be called that!) looks like: 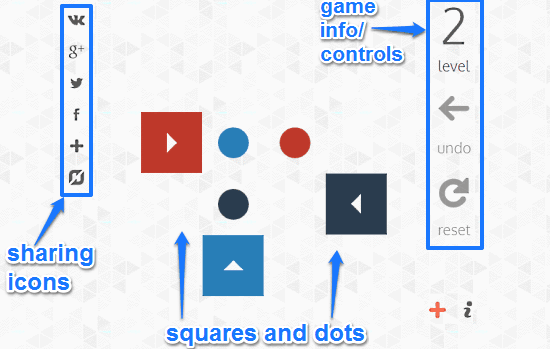 What do you think? Pretty simple, isn’t it? As illustrated by the above screenshot, Game About Square’s interface is as simple as it gets. Front and center, it consists of the previously mentioned randomly placed different colored squares with directional arrows, as well as the dots corresponding to each square.

Apart from that, the left side features a bunch of social sharing options to share the game with your buddies on major social networking services (the usual bunch of Facebook, Twitter and Google+). On the right, you have information about the current game level you’re on (represented by a big number), as well as the undo (to undo your last move), and reset (to reset the current level) buttons. Two small buttons on the bottom right let you share the game on a multitude of other social services, as well as find some general information about the game (and its developer).

How To Play This Fun And Addictive Square Based Game?

Playing and having fun with Game About Squares is essentially really easy. All you need is a web browser and a mouse.

Here’s a little step by step tutorial on how to get started with Game About Squares:

Step 1: Start up the game by going to its homepage. The first level just features just two squares and two dots, in order to get you acquainted with the gameplay. On this and a few more initial levels, the squares only move in the direction indicated by the triangular arrow on them. To move a square further by one step, click on it once. Once both the squares are on their respective colored dots, the level automatically finishes, and the next one is loaded. Check out the screenshot below: 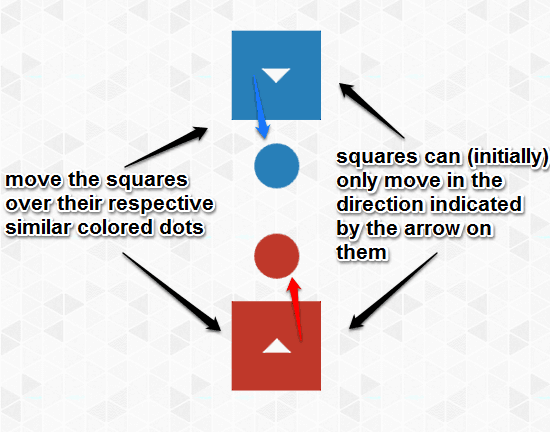 Step 2: That’s just about it. All you have to do is move the square over the dot having the same color as the square itself. The squares can be used to push each other. In each level, the objective stays the same, move the squares over the dots having the same color. Though as you keep moving further, the number of different colored square-dot combinations keep on increasing. In the later stages of the game, you also get the ability to change the direction of the squares, and other goodies as well. Here’s a screenshot of level 4, showing three different colored square dot combinations. 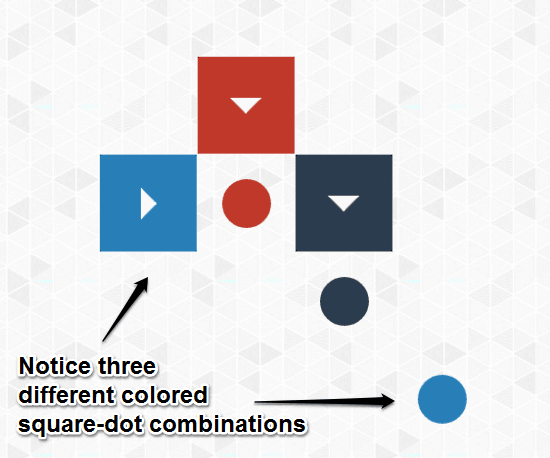 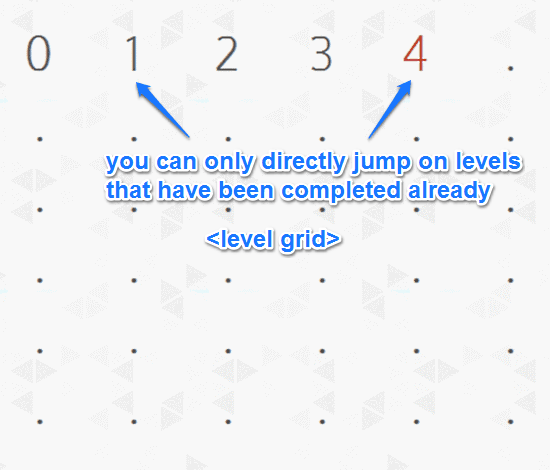 Game About Squares is an incredibly addictive square based game. It’s simple (though not that simple!), fun and works well with almost any modern web browser. A total of 36 fun-filled levels make sure that you stay engrossed for quite a long while. Add to it the addictively challenging nature of the game, and this has all the potential to be the next Flappy Bird. Do give this thing a try, and have fun!