This tutorial illustrates how to create a new playlist directly from Windows Explorer in Windows 10. Of the myriad array of interesting (and not so interesting) tasks that our blazing fast computers, running super smart OS help us accomplish, one (definitely interesting) is to attain aural nirvana, i.e. listen to music. Native music playback capability has always existed in almost all modern versions of Windows, and the improved version of the old stalwart Windows Media Player in Windows 10 makes things better. There are playlists, enhanced music management, and more.

How To Create A New Music Playlist Directly From Windows Explorer In Windows 10?

Note: To create a playlist, you need to have at least a couple of tracks in a folder (Although you can do this with a single track as well, but what’s the point in having a list that has only one item?). However, after the created playlist starts playing in Windows Media Player, you can add music to it from any other location, using the Add to Windows Media Player list context menu option.

Creating a music playlist in Windows 10 is incredibly simple. Here’s a step by step tutorial to get things started:

Step 1: Open up Windows Explorer, and navigate to the folder that’s having the initial few tracks that you want to use for creating the playlist. Select all the tracks (using the Ctrl+A shortcut). 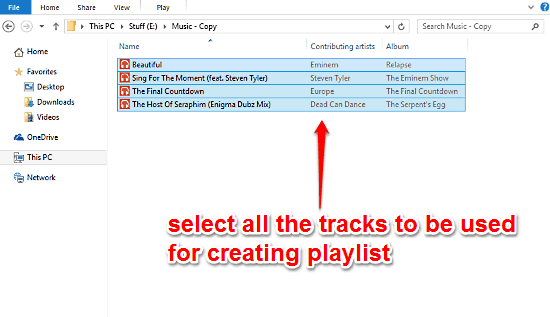 Step 2: Head over to the Ribbon Menu, and expand it (via the Ctrl+F1 shortcut) if it’s not already expanded. Click on the Play tab (highlighted by the Music Tools header) to see its options, and click on the Add to playlist button. Here goes a screenie: 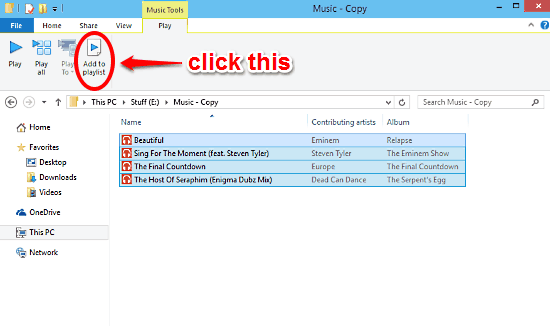 And Voila! Windows 10 will instantly create a playlist with the selected tracks, and start playing it in Windows Media Player. Ain’t that awesome?

See Also: Choose Apps That Can Be Used For Sharing In Windows 10

Listening to music is one of the most commonly performed activities on just about any computer, whether it’s running Windows, or any other OS. The Windows family of Operating Systems has always excelled at music playback, and the freshest Windows 10, with its improved version of Windows Media Player makes things even better. Add to it the fact that you can create a playlist of your favorite tunes and start listening to them in two click, and you just don’t have any excuse left to not start grooving to your favorite numbers.