SQL Server Change Reporter is free SQL server auditing software. SQL Server is a complex structured database within which critical information is stored and nested in such a way that one minor change can cost fortune to a company. SQL servers have many configurations that are required to be complied with laws and regulations and also with technical issues.

Companies understand the need of data that are stored in the SQL database and thus they require free SQL Server audit software which can track changes to the SQL server and report SQL changes.

Other tools to report SQL changes and work with SQL in general include Oracle SQL Developer and OpenRPT. 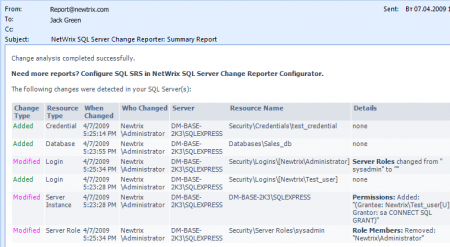 This free system utility is user friendly. SQL server is object-oriented. This can lead to unauthorized changes made in one part of the SQL server and affected all the other nested database, schema and objects. SQL Server Change Reporter here comes in handy. It does not report only changes made in the configurations but can also report SQL changes in the database, users, roles, login, schema changes and many other objects. You can keep track of the changes with this free audit software. However, free version can report changes to database users, roles, and schemas only.

SQL Server Change Reporter provides daily reports on recent changes. Thus you can scrutinize changes made in the database, and detect any changes that are unauthorized and not important with this free system utility to track changes to the SQL server.

Daily reports from SQL Server Change Reporter keep you up to date, and you can avoid loss of critical data by being quick and informed. Along with it, the free server auditing software keeps at least two days of archive of the reports generated by it. Keeping you abreast with the modifications done may be in weekend or say during day offs.

Some other free software from same publisher are Virtual Machine Sprawl Tracker, and Windows Service Monitor.