Photoseed is a free application for iPhone and iPad which will prove to be a boon for Minecraft fans. It enables you to edit your photos by adding Minecraft faces and weapons to them. In case you are not aware, Minecraft is a classical computer based game which was extremely famous in its time. The pixelated images in Minecraft give a whole new effect to the photos you are editing using this application. Also, like any other photo editing application, there are options for sharing.

Photoseed already has an Instagram account where other photos edited using Photoseed are uploaded so that you can get ideas for editing. 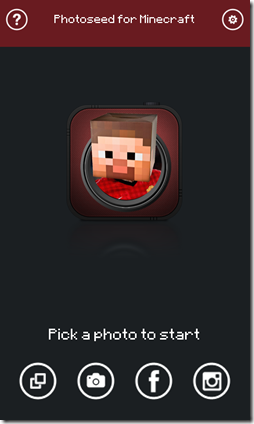 You can either click a photo you want to edit or you can instead pick one from the library. Images can also be imported from Facebook and Instagram. Once you choose a photo to work on, there are tons of options for choosing faces which can be superimposed over your photo. Tap on the face icon in the task bar above and you will find multiple options for different faces. Next option is to edit the scenery behind you. It contains stones, grass, fire, wood etc. depending on your preference. The third option contains something like shoes and helmets.

With the option having icon of a sickle, you can choose different types of weapons like swords, axes, sickles and so on for editing your image. In the next option you have many elements of Minecraft if you want to use them. For other option, you have food items which were used in the game. There are many super hero figures (pixelated Minecraft version) for editing images as well. 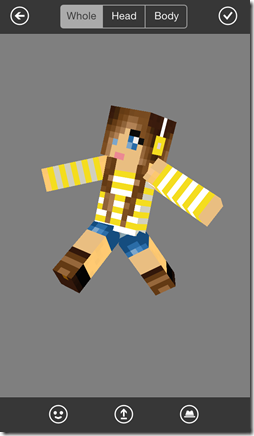 Amongst many other options there are some options worth mentioning. These options have 3D written over them. In this option you can tweak the character’s head, body parts like arms and legs etc. according to your image. Thereafter you can use these elements separately in your image. You can pick head of the edited image or the body and so on. You can also add text to the images and blurbs over a character just like in comics or should we say, like Minecraft.

There are options for tweaking thickness, colour and size of the text. There is also an option for downloading the application called ‘Skinseed’ in which you create skins for Minecraft. After making particular skins they can be imported in this application too.

Photoseed is beautifully integrated with some basic app editing gestures as well. Tapping on an item selects it, pinching it with two fingers resizes it. Once you tap in the background, the item is unselected. One beautiful feature is that you can erase parts of the characters/weapons/faces used from the editing toolbar. This will help you in fine tuning the edited image. The paint button brings back the erased parts. 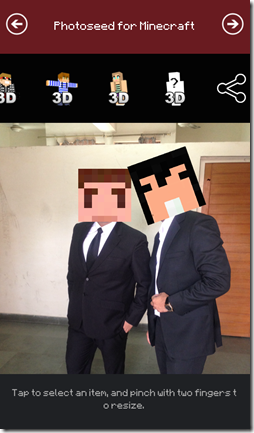 Photoseed is a purely meant for Minecraft fans. It is an awesome way to depict your love for the game while you enter a similar world by editing yourself in it. Photoseed has made serious attempts to replicate that experience and most probably has succeeded in it.

Get Photoseed for iPhone free from here.