Here’s a list of 5 ISS tracker apps for Android which you can use to keep track of where in the sky the International Space Station is located in relation to your location. Apps from the list down below will take your location and then let you know when the Space Station will do a fly over, so that you can catch a glimpse of it using binoculars or a telescope. All these apps can be downloaded on your Android devices free.

Let’s see how exactly it is that these apps work. 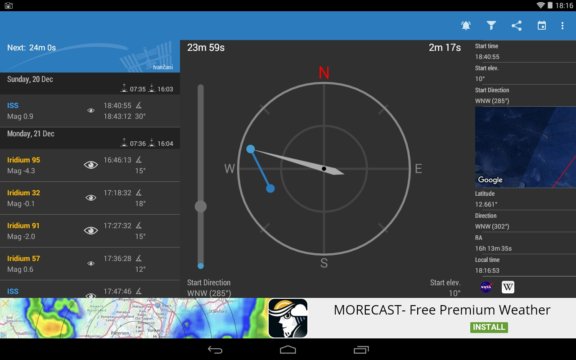 ISS Detector Satellite Tracker is an advanced ISS tracker app which automatically detects your location using either the internet connection or GPS. At the center of the interface is a compass which tells you in which direction of the sky you should be looking (west for me) in order to spot the ISS.

App also gives info on flybys of other satellites (list in the sidebar). Time frame for sightings is reported (from 18:52 to 18:57 for example). There are push notifications 5 minutes before the flyby and more. 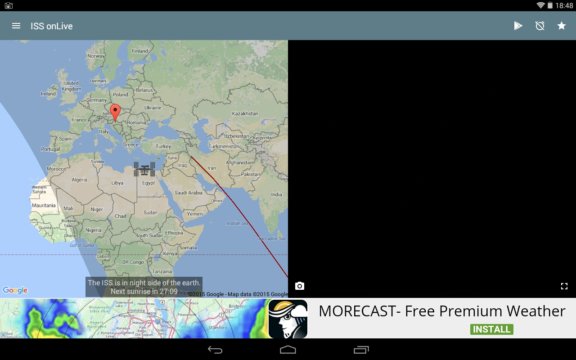 ISS onLive will give you a live view of where the ISS is compared to your location and it will do it using Google Maps.

Live tracking of the ISS is just a part of what ISS onLive has to offer, just one half of the screen. The other half of screen is reserved for a live feed from the ISS cameras, but that didn’t work while I was testing the app.

Also, have a look at 5 Free Solar System For Kids Websites. 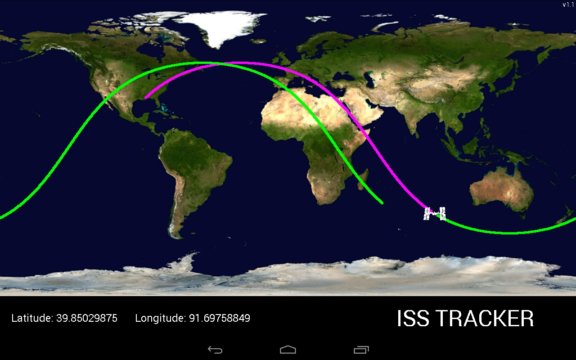 ISS Tracker is a much more simpler app, especially when compared to the two ISS tracker apps that I covered so far. It only shows a map of the world, with the current path (in other words the current orbit of the ISS, in purple), and the path of the future orbit (in green).

You’ll have to figure out your location on your own, but the reports of orbits will sure come in handy when trying to figure out the general direction where you should be looking for the ISS. 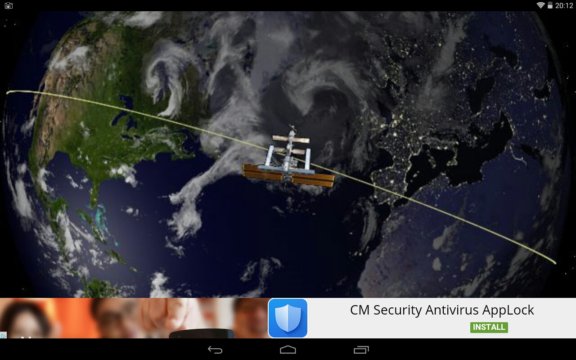 ISS Tracker offers 4 different methods of how to track the ISS. First is the Google Earth method, which can be seen in action on the image above. Here you see a globe and the orbit of the ISS in real time.

Next up is the Google Maps method, live tracking of ISS through the use of Google Maps. Third option are text predictions (date, time, direction) of ISS flybys based on your location for up to 2 weeks in advance. You need to select your location (country, nearest city) to get the predictions. Last feature that this app has are live video feeds from the ISS, just like the ones offered by ISS onLive. They didn’t work, same errors were shown like in ISS onLive, which probably means that it’s a problem on ISS’s end. App also offers ISS news, tour and a feed from the NASA TV.

Also, have a look at How to Set NASA Picture of the Day as Android Wallpaper. 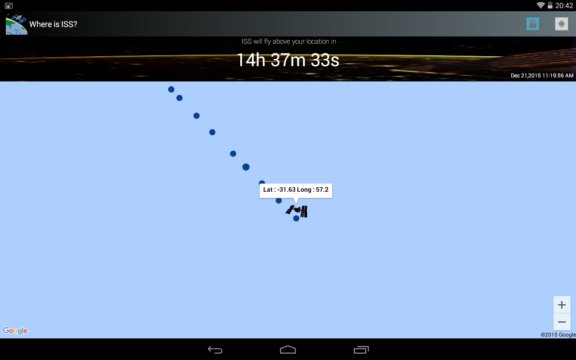 Where is ISS is a nice mix of simplicity and the kind of advanced features found in ISS Tracker. It offers live tracking of ISS using Google Maps.

App will detect your location, and give you a countdown at the top (hours, minutes) when the next flyby of the ISS will happen over your location. There’s no extra features here, only two buttons in the top right corner for narrowing in on your location and the location of the ISS on the map.

Get Where is ISS?.

Out of the 5 ISS tracker apps for Android above, the two that caught my interest the most are ISS Tracker by Triamide and Where is ISS. First one offers live tracking and live video feeds from the ISS, while the second one just focuses on tracking, meaning it’s simple. Let me know which app you think is best by leaving a comment down below.