Dumb Ways to Die 2 for Android is a sequel to the popular game which includes several mini-games inspired by the Dumb Ways To Die video which was made by Melbourne Metro Department. In this game, there are cute characters which you have to save from death due to various ‘dumb’ situations. You get 3 lives in the game and once you die thrice, it’s game over and you have to retry!

But I will have to admit that in some of the mini-games, even the way you die and the accompanying animation is hilarious (I know that sounds ruthless, but the devs intended to keep it this way, I think)! 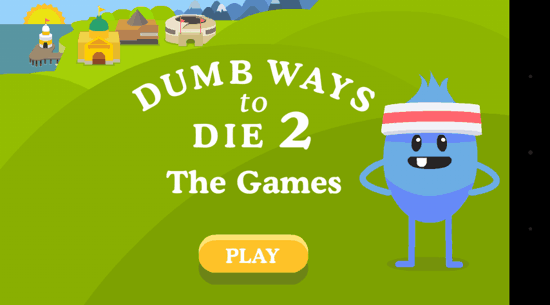 GamePlay of Dumb Ways to Die 2 for Android

Dumb Ways to Die 2 builds on the funny premise of the original game and expands on it further. There are numerous mini games and each one is unique in its own right. There are Mini Games like Stay Off the Tracks, Dive Into the Pool, and Swim as Fast as you Can, to name a few. Most of these mini-games come in a series and you have to complete a particular series to have a high score which is submitted online. You have three lives in all and you need to complete a set of mini games BEFORE you run out of lives. 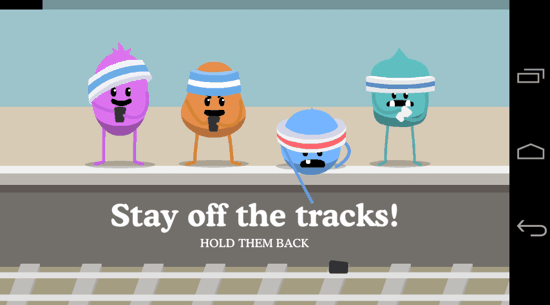 Dumb Ways to Die 2 for Android is almost reminiscent of the first game with similar cute animations but newer mini games. When you launch the game, you will be greeted with a cartoonish scene and a small toy train in the middle. To play any mini-game, you can tap on any of the icons for the mini game, and the toy train will move and reach that icon with an animation. 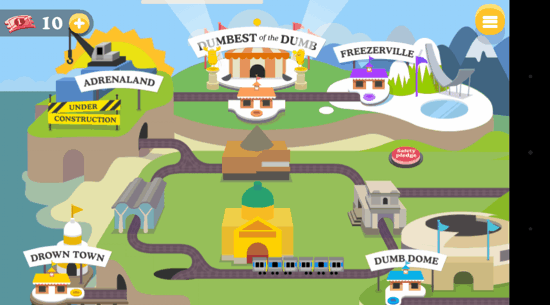 The mini Games are named as Adrenaland, Freezerville, Drowntown, DumbDome and Dumbest of the Dumb. There is also a Safety Pledge to remain Safe around ‘Trains’, and that too, seemingly near the tracks of the toy train in the Game’s Main Screen. 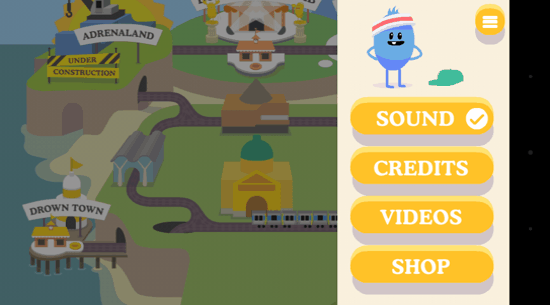 There are some in-game options which can be accessed by tapping on the hamburger menu icon on top right corner of the game’s main screen. Just tap it and you’ll see the options to switch On or Off the Sound or watch Videos from the Dumb Ways to Die campaign (shown in the screenshot above).

Dumb Ways to Die 2 is a fun game but definitely not meant for ‘serious’ gamers. The Gaming element is less emphasized here. To be precise, the gaming element is in fact overlapped by aspects which are aimed towards being funny, rather than providing a prolonged gameplay.While some of the mini-games are genuine and have real life scenarios, others are plain ridiculous, yet funny. The Game is available as a free download though, so you can just go ahead and get it from the Google Play Store.

Get Dumb Ways to Die 2 for Android.