Smartphones nowadays are big on features, but their battery life suck. The biggest reason for poor battery life is the big touch screen. The display as well as touch consume most of the battery (and of course, there could be some bad apps too). If you are using some app to analyze battery usage of Android, you will notice that Display takes a big chunk of battery usage. There are many apps out there that help to extend battery life of Android, but the best and easiest thing you can do is to tackle the display of your Android phone.

If you can keep screen brightness of Android to as low as possible, you will easily extend the battery life. Android phones do give options to change screen brightness, but the process is normally not that simple, so most of us don’t go through the hassle. That is where this Brightness control app comes handy. It makes the whole process quite simple, so that we don’t mind doing it. 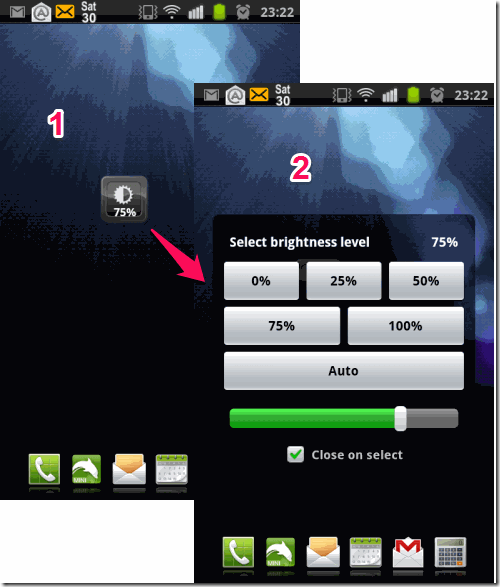 As you can see in the screenshot above, Brightness Level app provides a widget that you can add on your Android home screen. In the screenshot marked as “1” above, you can see the small icon of this app. Another thing to note in that is it shows current screen brightness in percentage. So, at anytime, you can easily know what is the brightness percentage of your Android phone.

If instead of choosing one of those percentages you want to choose a specific brightness percentage of your own, you can use the slider at the bottom. Just select it to your desired level to set screen brightness accordingly.

Verdict About this Brightness Control Widget:

Get Brightness Level App for Android.