Tiny ABC is a free iPhone kids app which helps kids in learning alphabets as well as animal names. The app consists of colorful interface and well-designed games, which make it very easy for the kids to learn both alphabets and animal names. The app has 4 different games to keep your kids engaged with the app. All the game are so thoughtfully designed and developed that kids will surely like them. The app has some paid levels as well, that are unlocked.

The best part of this app is Parental Control. If your kid tries to leave the app or tries to purchase something from within the app, then the app asks for a random 3 digit number to enter. 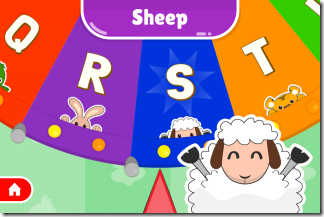 When you launch the app, you will be asked to Play as a Kid or a Family Member. Tap on one of those option to create your profile. During registration, you will be provided with a random username. The app doesn’t let you choose your own username, although you can keep changing until you find one which you like. You have to use the lever (shown in screenshot) to change the name until you find the best one for you.

You can see name of the game is Funny Animals. On tapping it, you will see a colorful wheel which is divided into different sectors with each sector having an alphabet written over it (see first screenshot of this review). There is also Red colored pointer just below the wheel. To learn alphabets and animals, all you have to do is just spin the wheel by sliding your finger over it. The wheel will start spin and will stop at a random alphabet. The app will tell you the name of an animal starting with that alphabet. The app speaks out the name of the animal. 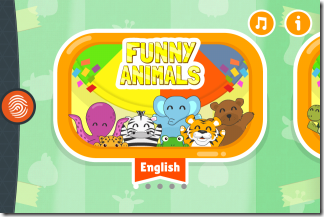 In this way, just keep spinning the wheel to learn all the alphabets and names of 26 animals. Apart from the alphabets, the wheel has four games as well. If the wheel stops at any of those games, then its time to play that game. These games are not traditional games but are educational games which help your kid to learn things faster.

The app has a total of 4 games: Pop The Balloons, Guess Who!, Memory Match, and Follow The Card.

Tiny ABC is a really awesome iPhone kids app to teach alphabets and animal’s name to kids and that too in interesting manner. All the four games are very interesting and can keep your kid hooked to this app. I also liked color combinations used by developers which can prove to be quite effective in attracting the kids. Do try this app.