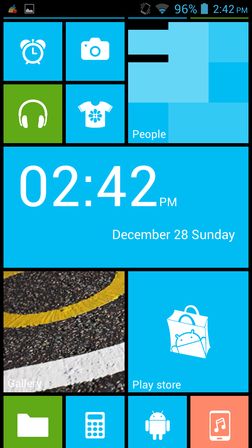 Launcher 8 is one of those very popular Windows 8 launcher apps, which has more than 10 million downloads.

It looks astonishingly similar to the tiled interface that Windows 8 and Windows Phone OS have, right down to interactive tiles, which can be seen on the image above. Left swipe opens a list of all the installed apps that you have on your device, something similar to what the Windows Phone OS has. From their shortcuts to new apps can be put on the screen as tiles. Lock screen is also changed. 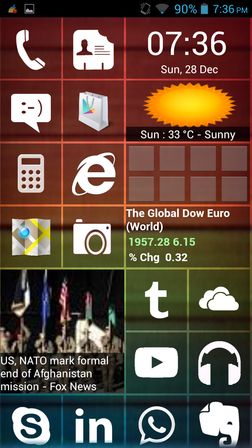 Home8 doesn’t have quite the same design that Launcher 8 has, it’s not as authentic, but you can see that it does have some semblance with the appearance of Windows 8 interface.

Tiles can be live (weather, news feed and the stock market ticker) or they can just be static shortcuts to apps. Left swipe will again open up the list of installed apps. Swipe up and down goes through the list of available tiles. Lock screen changes to a one with quick shortcuts to apps and also quick updates from the live tiles. Note that live tiles for Facebook, Twitter and other social networks require upgrade to the paid version of the app.

Also have a look at Download Free Windows 8 Theme For Firefox. 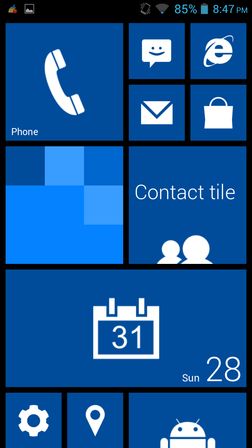 Launcher 8 is a much simpler Windows 8 launcher, simpler than Home8. Each tile requires you to tap on it and select which app you want to run with that particular tile.

New tiles can be added and connected to apps that you can then run by tapping on tiles. Tiles themselves are a bit interactive, with folding effects, but you don’t get live weather updates, news updates or anything else like that. Lock screen also isn’t included, so whichever one you used before installing Launcher 8, that’s the one you’ll be using after installing this Windows 8 launcher app. Ads in this app can be a bit intrusive, so use it at your own risk. 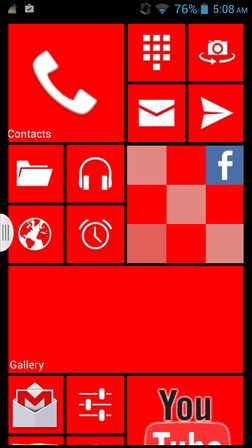 Launcher win8 Theme HD is very similar to Launcher 8. It comes with similar features and with one that customizers will love. It has dozens of different colors for the Windows 8 UI.

Open up the app settings and there you’ll find a large selection of different colors that can be applied to the launcher. Lock screen isn’t available and the existing one that you have on your device is gonna be used instead. Be warned that there are very intrusive ads in this app.

Also have a look here “Free Windows 8 Theme For Windows 7.

From the list above, I would suggest that you give Launcher 8 a try. It’s feature packed, very similar to the actual Windows 8 interface design and it doesn’t have the annoying ads Launcher win8 and Launcher 8 have. Home8 is a close behind in second place. Leave comments down below and tell me what you think the best Windows 8 launcher is.