Here’s a list of 4 Grooveshark apps for Android which you can use to enjoy listening music from Grooveshark on your Android tablets and phones. Those who aren’t familiar with Grooveshark, it’s a web-based music streaming service where users can find and stream a lot of popular songs. Custom playlists can be built from songs that you like and then played whenever you feel like it. Apps down below can be used to access Grooveshark music from Android.

Grooveshark Android Player is a great Grooveshark app, practically a full-fledged client for Android where you can start streaming music as soon as the app loads. 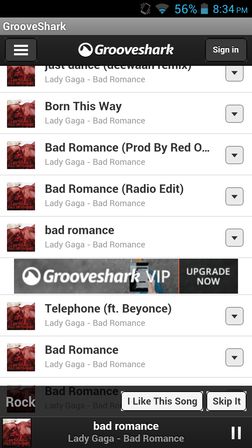 You can search artists, albums even playlists. Sign in with your account and you can access everything from your profile that you’ve setup on other devices. App lets you create queues with songs that you like. Player can play songs on shuffle, repeat (1 song, whole playlist) and you can sort the order of the songs any way you like. Be warned that the app has slightly intrusive pop-up ads. 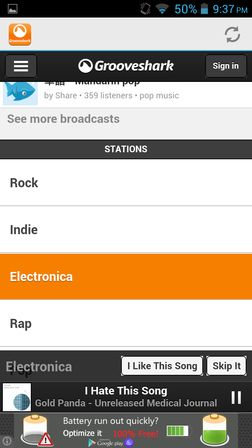 All the same functionalities are there, but the interface has a slightly different design. Colors are different which make it more user-friendly, text is more easily read, for example. Songs can be searched based on author name, song name and album name. Results for playlists are also gonna be showed. On the homepage , you’ll be given a quick access to popular Grooveshark radio stations.

Also have a look at 5 Free Grooveshark Desktop Client For Windows. 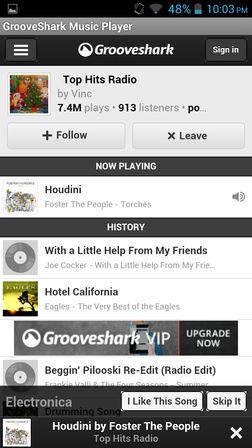 What’s different about GrooveShark Music Player is that it has considerably lesser ads that pop-up, so your overall experience won’t be as ruined like it might be when using Groovershark Mobile or Grooveshark Android Player.

MusicShark has the same kinda layout that all the previously mentioned apps have, which can be seen on the image down below. 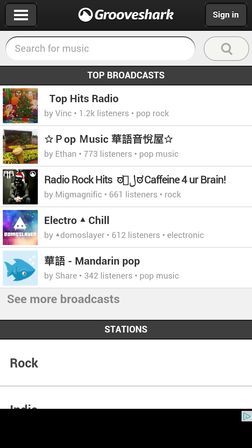 After running the app, you will see a list of currently featured Grooveshark broadcasts. Further down below, full list of available stations is gonna be showed where they can be browsed. Use the search at the top to find the artists that you like and create playlists of your own.

Also have a look at TinyShark For Android: Stream Music from Grooveshark on Android.

Like I’ve been saying already in the past couple of paragraphs, these apps are very similar to each other, so you won’t go wrong no matter which one you pick. Some of them have a bit more invasive ads, so you might want to start with Grooveshark Music Player which like I already mentioned, has the least intrusive ads out of all of the Grooveshark apps covered in the list above. Make app suggestions and tell me what you think in comments down below.