Here’s a list of three 8 bit sound generator software for Windows 10. 8 bit music is music that can usually be found in old video games like Super Mario, and of course modern indie titles. That’s where I got the idea for this article. I like music composed out of 8 bit sounds and almost always listen to it when working, to help with focus. These types of sounds are also frequently used in indie games, like I already mentioned. Applications from the list down below will help you generate 8 bit sounds to create 8 bit music and game effects of your own. 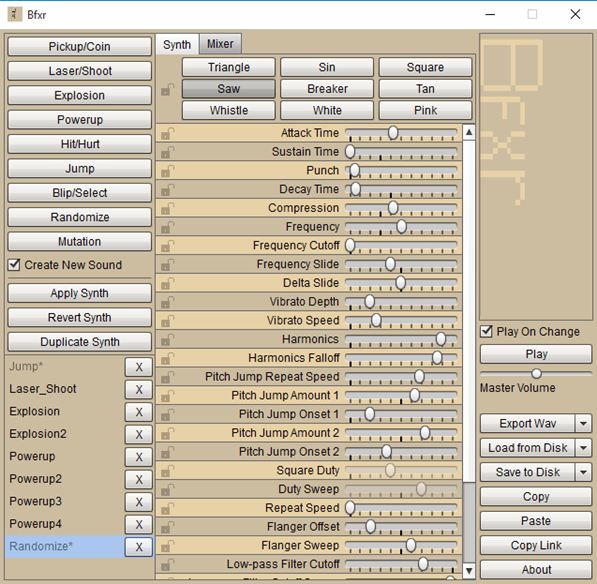 Bfxr is an advanced 8 bit sound generator software for Windows 10. This is an Adobe Air application, so you’ll need to have Air installed in order to use it. It’s also portable, which means that installation is not required in order to give it a spin. Bfxr has two great features. First there’s the large database of built-in 8 bit sound presets that you can build upon when creating 8 bit sounds of your own.

Now note that this software is aimed at game developers. That’s the reason why there are sounds like coin pickup, laser shoot, explosion, power up, hit, jump, select, etc. See the left sidebar for a full list of available side. Synths and a small mixer are located in the middle of the interface. Synth will allow you to additionally tweak sounds to make them your own. You can tweak things like depth, speed, frequencies, harmonics, etc. Randomizer button mixes up these settings in order to easily produce a unique 8 bit sound. Mixer lets you combine several sounds into more complex mixes, sort of like music tracks, only shorter. Multiple 8 bit sounds can be made at the same time. They can be exported as WAV files.

Also have a look at Online Platform To Play And Develop Games: Roblox. 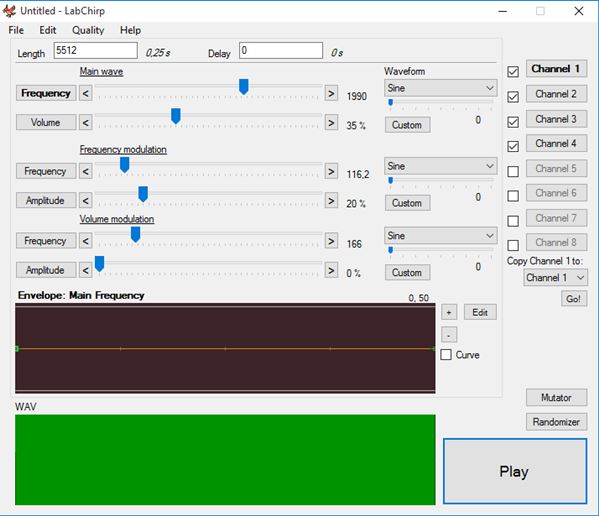 LabChirp is a more of a do-it-yourself type of 8 bit sound generator software for Windows 10 that’s very small (less than 1M in size), and it’s also portable. Unlike Bfxr, which has a decent library of 8 bit sound presets of its own, LabChirp focuses on creating new ones, from scratch.

This is achieved by adjusting frequency, volume and wave modulation, see image above. Up to 8 channels can be setup. Channels actually overlap each other so that more complex sounds can be created. If you don’t have a lot of experience producing sounds/music this way, it will take some time to setup the sound just the way you want it. Alternatively you could just hit the “Randomizer” button and let LabChirp tweak sound settings for you at random. Length of the 8 bit sound is customizable, as is delay in playback. Hit the giant “Play” button to preview the sound that you’ve configured. Finished sounds can be exported using WAV format. 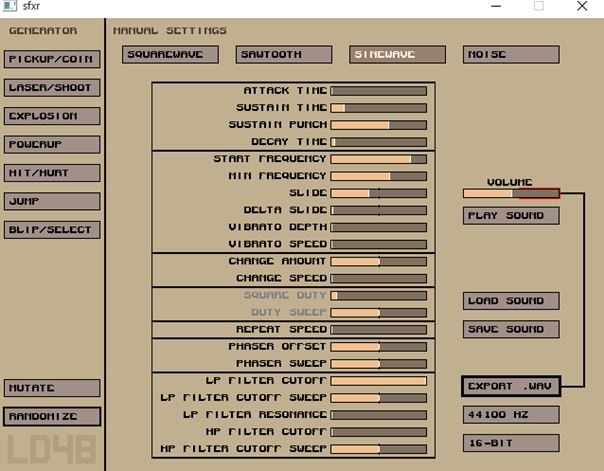 sfxr is a more simplified predecessor to Bfxr. It is also portable, and less than 100kb in size (archive). It has a library of 7 built-in 8 bit sound presets that you can build on top of, or you can create new ones from scratch.

New sounds are created manually using the sliders in the middle of the interface. What these sliders do is they change the sound frequency, speed, decay, vibrato, high pass, low pass and several other sounds characteristics. There are a lot of settings to make a specific sound your own. Make sure to click on the “Play Sound” button from the right sidebar after doing tweaks to preview the new sound settings. Difference between Bfxr and sfxr is that Bfxr allows you to setup multiple sound effects at once. In sfxr only 1 8 bit sound per work session can be created and exported to WAV, which is the only supported file format for export. Sound mixer for mixing multiple sounds is also missing. What is available and will no doubt come in handy, is the “Randomize” button, which will randomly tweak settings in order to create a unique sound. It’s simple and to the point.

Also have a look at 5 Websites to Play Free 8 Bit Games Online.

Out of the 3 8 bit sound generator software for Windows 10, the two that caught my interest the most are Bfrx and LabChirp. Bfrx one is very advanced and I really like the fact that you can generate multiple custom 8 bit sounds at the same time. Another very useful features is the built-in mixer, where multiple 8 bit sounds cam be pieced together into a new sound. LabChirp on the other hand has a highly customizable approach to creating 8 bit sounds. Where almost everything is setup from scratch. sfxr is basically a lightweight version of Bfrx, but it can still come in handy if you’re not a too demanding of a user. Let me know what you think, which 8 bit sound generator software is the best by leaving a comment in the comment section down bellow.