Here is a list of 5 of the Best Note-taking apps for Android with Online Sync. While admittedly, there are numerous Note-taking apps on Android; I will be including only my favorites here. So, these apps are available for all the popular Operating System Platforms, and hence, offer robust features (in some cases), and have support for synchronization across devices. Whichever app you pick, you are sure to get an intuitive interface. Not to mention that you do even get advanced editing and formatting tools in certain app(s). Go on, take a look at these Note-taking apps before you get another idea in your head and forget it just because you couldn’t jot it down!

Evernote is probably the most popular Note-taking app for not just Android but any of the platforms out there. Evernote offers you numerous features to increase your productivity and has cross-device sync. The interface is highly polished, and with the latest update, it has also gained some Material Design aesthetics. You can use Evernote to create notes with your Handwriting, Audio, Attachment, a Camera photo, Simple text, or even set reminders. Even if you choose to create simple text notes, there are numerous formatting options which will allow you to emphasize just the right portions of the right notes. Not just that, Evernote even let’s you chat with other users! Yep, you should go ahead and Install Evernote if you want a feature-packed note-taking app. 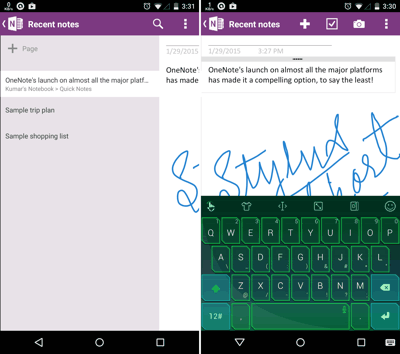 Microsoft OneNote has been a long-standing Note champ for Desktop PC users. But with its introduction on other platforms, it has now become one of the most compelling options out there. There’s no doubt that OneNote is a great app for note-taking, but once you consider its rival(s), specifically Evernote, it lags behind in terms of features. While Onenote is nothing less than impressive on desktops, the Android app isn’t too intuitive and looks clunky (although that might be a personal opinion). But the ease of use is present here as well, and the sync via your Microsoft Account is instant and extremely reliable. There is support for digital Stylus though, and you can include handwritten and typed text in the same note! 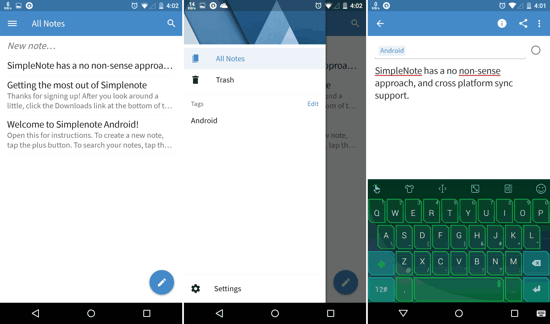 SimpleNote, as the name suggests, is a simple note-taking app which is meant for text-only notes. Yep, there are no extra features or settings whatsoever. Just a minimal design, your text-based notes, and cross-platform sync — that’s how I will sum up SimpleNote for Android. You can save tags to your notes to segregate them, and these tags will be added to the slide-out sidebar. Give SimpleNote a try, and you might end-up liking its clutter-free approach and the beautiful Material Design. 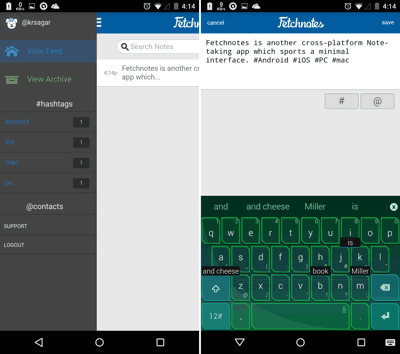 FetchNotes for Android is another Note-taking app which aims for minimalism. Yep, you got it right — FetchNotes is another text-only Note taking app. Do not expect any extra features here as all that FetchNotes tries to do, is save text-based notes, and Sync them across all your devices. But it has a couple of cool tricks up its sleeve as well! In the Note-taking screen, you can use the “#” icon to add tags to notes or organize them, and you can also add collaborators or share your notes by using the “@” icon and typing your friend’s username. See it for yourself and decide! 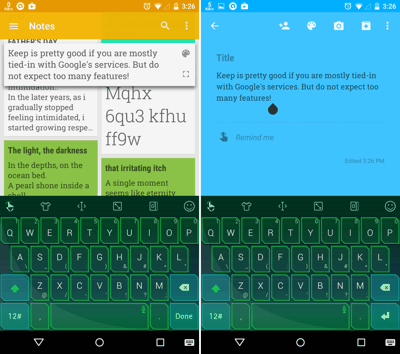 Google Keep is one app which every Android user must be familiar with. And all those Material design enthusiasts must already be drooling over that colorful look. But let’s get one thing out-of-the-way here — Google Keep DOES NOT offer cross-device syncing since there is no official client for iPhone or iPad. But other than that, users who are invested in the Google ecosystem will have almost nothing to complain about. You can attach images to notes, set specific color themes for them, and archive them if you want, and they will be accessible from your Desktop PC or Chromebook as well!

So that concludes this list of 5 of the Best Note-taking apps for Android with Online Sync. Do tell us which option sounded the most intriguing to you.