This tutorial explains how to get iOS 8 dialer for Android. It is a very simple tutorial to follow and within matter of a minute, you will be able to use iOS 8 like dialer on your Android device. You can give it a try for any reason, be it just for customization purpose or you fancy Apple devices especially iPhone.

This tutorial will not only help you get the iOS 8 dialer, but it will also show you the Recent Calls, Contacts, Favorites and Incoming Calls in iOS 8 style.

So, let’s get started.

Steps to Get iOS 8 Dialer for Android:

Install the Caller Screen Dialer app from the Play Store. On installing the app, you don’t have to do anything else. Use your phone like you do normally and whenever you will receive any call, you will see the iOS 8 like call screen. You can see that even the interface after picking up the phone is similar to iOS 8. 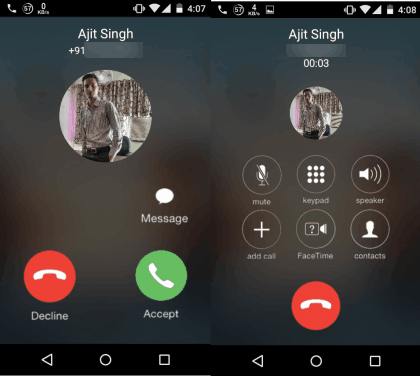 As for iOS 8 dialer, you simply need to launch the app. You can see the iOS 8 like dialer shown in the screenshot posted below. 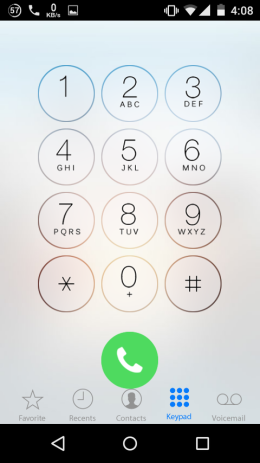 At the bottom, you can see there are different options: Favorites, Recents, Contacts, Keypad, and Voicemail.

So, you saw that each of the components of the app has iOS 8 like interface which gives an iPhone-like feel to your Android phone’s dialer and calling interface. Feel free to get in touch with me via the comments section.

You may also like: 5 iOS 8 Launcher Apps for Android.