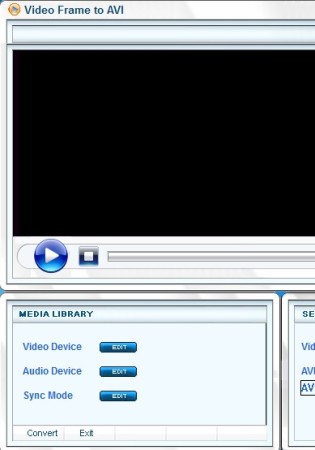 Interface of this free video recorder can be seen on the image above. Large empty area at the top where you can preview video that’s being recorded. Down below you can adjust the video and audio devices that you’re interested in using, different capture device can be set for video and audio. Additional settings are available in the bottom right corner of the screen where you can select the frame that you want to add and also select the output video format. Key features of Video Frame To AVI – free video recording software are:

Frame effect that’s available in Video Frame To AVI can be used when you for example want to create videos for your video blog, and move away from just having plain video, without any kind of decorations to catch the eye of your viewers. If you don’t want to have frames, don’t worry, they can be easily turned off. Let’s see this free video recorder in action.

Video and audio devices that you’re gonna use to capture video can be set by clicking on the Edit button next to Video and Audio Device options, inside the Media Library section of the interface down below. While you’re there you can also open up Sync options, in case that audio stream is late or ahead of video. 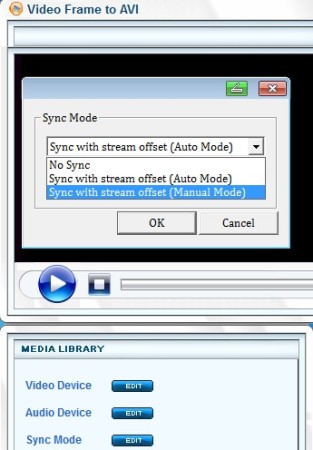 Preview of the video that you’re interested in recording can be opened up by clicking on the Play button, below the black screen at the top, where the preview will start playing. 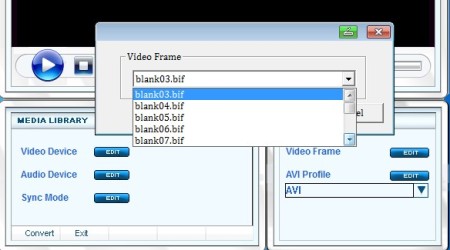 Last thing that you need to setup before you can start recording would be the Video Frame that you’re interested in using. Again click on Edit next to Video Frame and select the one that sound most interesting, blank if for none. When you’re done with setup, click on Convert to start the recording.

Video Frame To AVI is great for all those who need a simple application for recording video from their capture devices. Everything’s very easy to setup and as cherry on top, you get the video frame effect, for adding a bit of zest to your videos. Free download.