Capture2Text is free software to extract text from image. Capture2Text lets you select the area on the image (which consists of the text) and then Capture2Text extracts the text from the selected area. After the extraction is over you can simply paste the text in any text editor. It is called the OCR (Optical Character Recognition) feature of Capture2Text. 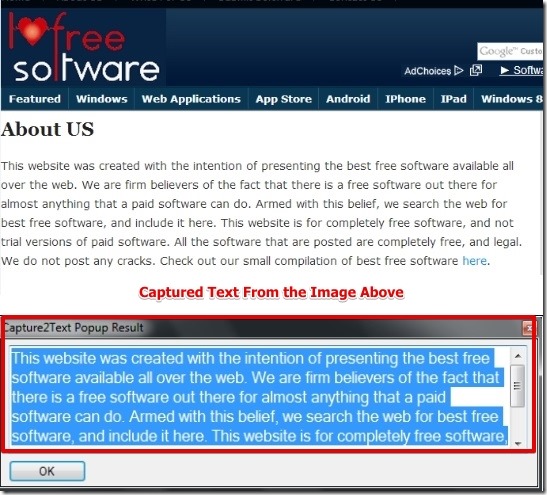 Note: Capture2Text also offers speech recognition feature but I have not reviewed it in this article. 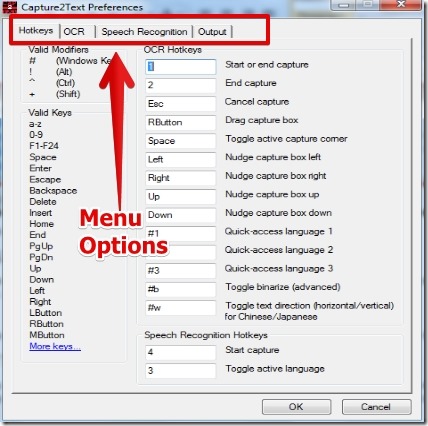 In the user interface you can edit the hotkeys, change settings for the OCR, speech recognition, and edit the output for the extracted text.

How To Use Capture2Text To Extract Text From Image:

In order to open and cancel text capture you have the hotkeys/shortcuts which you can view and edit from the preferences. There are lots of other shortcuts also which you can use for the toggling the text direction, language, and nudging the captured area. The hotkeys can be accessed from the user interface.

Another feature I really liked in Capture2Text is that you can directly send the extracted text to any text editor. For this you have to simply select the Send to cursor option by right clicking Capture2Text icon in the system tray, you will have the captured text sent directly to the text editor that has the cursor in it.

Note: Capture2Text also offers the option to send the extracted text to a specific text editor. However, this option did not work for me.

You can also try out PDF Text Extractor. It is free software to extract text from PDF Files.