Cyber-D’s SWF2JPG is software that you can use to create image snapshots of SWF files. SWF is a very popular format developed by Adobe which is used by a lot of websites to display videos, but not only that, SWF also supports interactivity, so you can even write programs with it, SWF games are very popular. Finding a good SWF player to play files locally on your computer can be puzzling to some, how to create snapshots of SWF video files is whole other level of difficulty, that’s where Cyber-D’s SWF2JPG can help out. 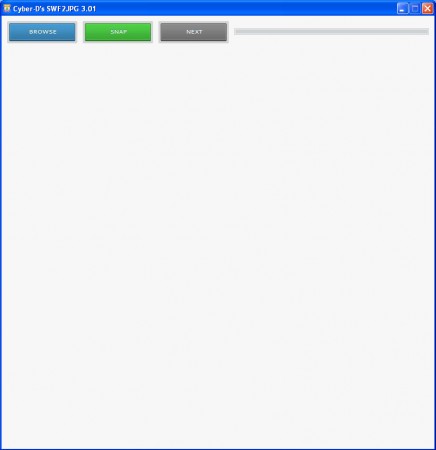 Interface of this SWF snapshot utility is a bit poor when it comes to options, which might cause problems to people who do not have a lot of experience with similar software. Great thing about Cyber D’s SWF2JPG is that it is also a SWF player, so you can use it to not only create screenshots of downloaded SWF files, but also to watch them, in fact watching files is necessary because files have to be running when you are creating snapshots.

Similar software: All in One Video Converter, Adapter File Converter.

This is not an automatic converter which will convert every frame of a SWF to JPG image, it’s only a screen capture program which you can use to take screen caps of SWF files which are playing inside the application. To start creating screen caps of SWF files, click on the Browse button which is the first button located in the upper left corner of the application and then open up the folder where SWF files are stored: 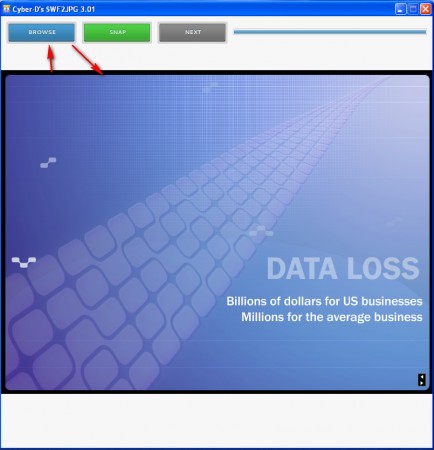 File will be loaded to the center screen of the application and it will start playing right away. If you have several files inside the folder that you opened they can be accessed by clicking on the Next button, located next to the Snap button. Snap button is the button that will create the snapshots, you just need to click on it, the usual camera sound will be heard which tells you that a screenshot of the video has been successfully taken. 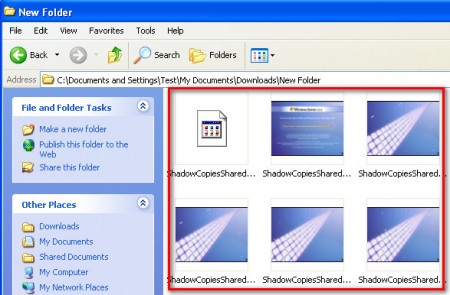 By default files will be saved in the same folder where the SWF file is located. Location of the output images cannot be changed unfortunately, pretty much nothing can be changed, program offers very little options, which is a small drawback but nothing too serious. Recorded snapshots are saved in the popular .JPEG format, in very good quality, there’s no pixelization or anything like that.

Having a program that can take screen grabs of SWF videos might come useful if you have a presentation of some sort from which you would like to take out certain parts. Rapid screen shooting works, by that I mean that you can click on the Snap button very fast and program will create images as fast as you can click, there are no delays and every screen grab is recorded. Those who are in need of a SWF player/screen grab combo, should really look into Cyber D’s SWF2JPG, it has both of these features.