All CPU Meter is a free CPU usage gadget for Windows which displays CPU activity information on your desktop. Next to showing CPU activity, both as usage bars and activity diagram, it can also show memory usage, for RAM and pagefile. Detailed information about the processor and operating system are also gonna be showed, CPU make and model, Windows version, and so on. Multi-core CPUs will have a break down of activity for each core.

Gadget in action can be seen on the image down below. Activity diagram is available at the bottom of the gadget. At the top of it, you will see information about your CPU, including a logo. In the middle you will see info about RAM and page file usage in numerical values, and again as usage bars. 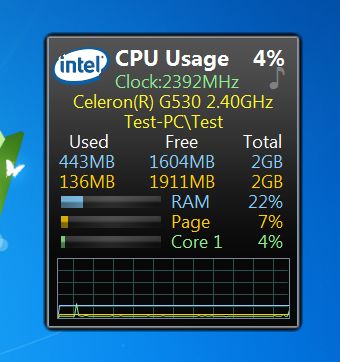 Each segment of the gadget has a different color, overall CPU activity, each individual core, physical memory, pagefile usage and so on. This free CPU usage gadget only had 1 core to track on our test machine, but if your machine is multi-core, then you’re gonna see all of them listed on the gadget.

Key features of All CPU Meter are:

During installation installer tries to sneak pass by you a browser toolbar, so make sure that you un-check that option, unless you’re interested in installing it of course. In order for the temperature of your CPU to be detected, you need to have an additional application, PC Meter, that’s created by the same publisher installed on your system. Here’s a few tips to help you get started.

To tweak All CPU Meter, for example to increase the widget size, you’re gonna have to hover your mouse over the widget and then click on the wrench icon in the top right corner. 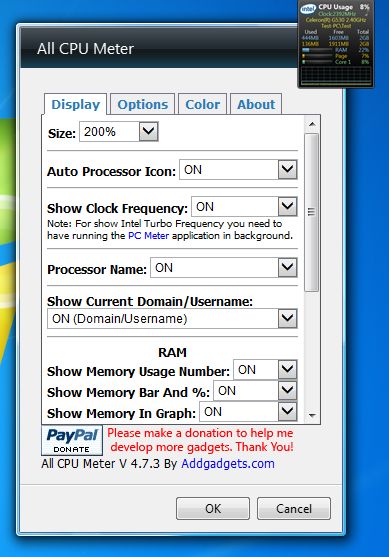 Widget size can be configured by opening up the Display tab. Temperature notifications under Options and widget color under the Color tab.

By clicking on the CPU Usage text, which can be seen at the top of the gadget, expanded CPU information will open up in a window to the left of the gadget. Here you’re gonna see detailed info about the CPU and your system.