This article details 5 best mac OS like docks for Windows 10. One of the most useful features of Apple’s Macintosh line of Operating Systems is the mac dock. Gorgeous looking and easy to use, it makes managing, organizing and switching between running applications and open locations a breeze. What if you could get the same awesome dock experience on the shiny new Windows 10? That’d be great, right?

As it turns out you can, as there is a whole bunch of some really cool mac OS like dock programs out there. These applications let you add custom shortcuts, change magnification and animation settings, and have widgets that provide instant information about everything from current weather to CPU usage. All set to get some Macintosh style goodness on your PC? Let’s find out more about 5 best Mac OS like docks for Windows 10.

Lightweight and full of goodness, RocketDock is just what you need to get a near perfect Mac OS like dock experience on Windows 10. It is extensively customizable, and does a great job at emulating nearly all the standard dock functionalities. When launched for the first time post installation, RocketDock appears on the top edge of the desktop, however, you can easily tweak the placement via the dock settings. While initially having shortcuts to important system locations such as Control Panel, Recycle Bin etc., RocketDock lets you add a shortcut to just about any location or application on your PC. There is quite a handy selection of some great looking themes, and you can tweak everything from the transparency, to the hover effects. The list of features also includes running application indicators, and the ability to lock certain items. Click here to find out more.

Although there’s no dearth of awesome features in XWindows Dock, the one that stands out immediately is the stunning looking interface. Put simply, it’s one of the most gorgeous looking docks for Windows 10. But apart from the looks, XWindows Dock includes a whole bunch of goodies. By default, it runs on the bottom edge of the desktop, but can be easily moved around to the other edges via the dock settings. The dock can be rendered in 2D or 3D, and you can easily tweak the size of the icons via a handy slider. Not only that, XWindows Dock also lets you enable icon shadows and window reflections for an even better experience. Certain items can be locked, and running apps and windows can be minimized to the dock as well. To top it all, XWindows Dock lets you add a new shortcut by simply dragging and dropping the target location or application on the dock. Read more here.

On the lookout for a powerhouse dock application for Windows 10? Look no further than Winstep Nexus. Loaded with awesome features to the brim, Winstep Nexus makes managing and switching between multiple open windows and applications a cakewalk. By default, it shows up on the top edge of the desktop, and this can easily be changed via the program’s settings. Winstep Nexus displays all the running applications, organizing them with built-in task grouping and filtering. In addition to that, it can also display the components of system tray, both individually and as a group. The pre-included widgets let you keep tabs on everything from the current weather to the CPU usage. And of course, you can add as many custom shortcuts to Winstep Nexus as you want. There’s also a whole variety of animation and reflection effects. Click here to know more.

If there’s one application that almost perfectly mirrors not only the functionality of the mac dock, but also its looks, it has to be RK Launcher. Sporting a lean and translucent interface, RK Launcher by default starts up with pre-configured shortcuts to important system locations and applications such as Windows Explorer, Windows Media Player, Control Panel, and Recycle Bin. Not only that, the icons used for these shortcuts are near identical to their mac counterparts. RK Launcher is highly configurable, and you can tinker with everything from the dock size, to the magnification, to screen position. For better performance, you can even change transition quality. RK Launcher lets you add custom shortcuts, and separators make it even easier to manage the dock items. 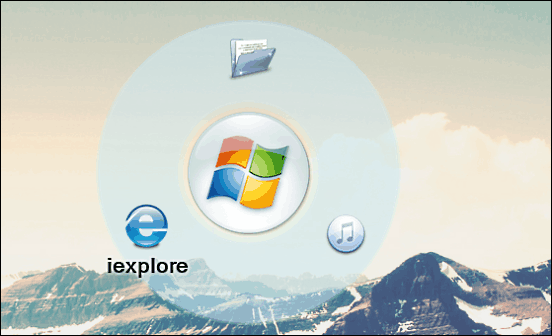 Finishing things off is Circle Dock, which is easily the most unique of all the applications mentioned on this list. That’s because unlike all regular docks, which are linear, Circle Dock, as its name suggests, is circular. When run for the first time, Circle Dock is devoid of any shortcuts, however, you can easily add the same for just about any location or application in mere seconds. For this reason, Circle Dock also include a bunch of awesome looking PNG images, based on everything from My Computer to Recycle Bin. Another good thing here is that Circle Dock can be moved juts about anywhere on the screen, unlike regular docks which display only along the edges. From the circle’s radius to the animation duration, the unique looking dock provides quite some customizability. And the fact that it’s available as a standalone portable application, sweetens the deal even further. Visit this link for more details.

The applications discussed above are perfect for getting a perfect mac OS like dock experience on Windows 10. Take them for a spin, and shout out your thoughts in the comments section.