XWindows Dock is an attractive, free application launcher which gives a new look to your Screen. It’s a launcher where you can have your favorite folders, programs and other files which you might want to access with just a click and not search within the folders.

The launcher also works as a free desktop organizer and can be placed anywhere on your desktop and you can add your favorite programs and files by just dragging them to the launcher panel.

In order to download and install this launcher on your computer you need to follow the following steps:

People interested to try some more app launcher can check out Launchy, Circle Dock and MadAppLauncher

The software is pretty simple to use where you need not do much to customize it and have the direct link to your favorite applications. As seen in the screenshot below the launcher is present on your desktop with Recycle Bin and My Computer as the default icons in the launcher.

You may add as many apps which fits the window and make your launcher give a great feel to your computer. It would not only help you reduce time but also make sure you don’t need to search for the applications which you use on a regular basis or the ones which are important and you may need them anytime.

In order to have a look at the several options the launcher comes with, you need to right click in a blank area which would popup the options which the launcher comes with. As seen in the screenshot below you would see that there are options to open applications, add some default applications check out the options and properties to customize and more. In order to set the way you wish to see the launcher you need to click on the preferences which would popup a new window with several options on it.

This new window comes with three main options which are:

In the general tab you have the option to check and uncheck for changing the look and presence of the launcher on your screen. For example you may change the radio button to 3D to have a 3D look to the launcher. There are of course much more to change and set the way this software runs from here. 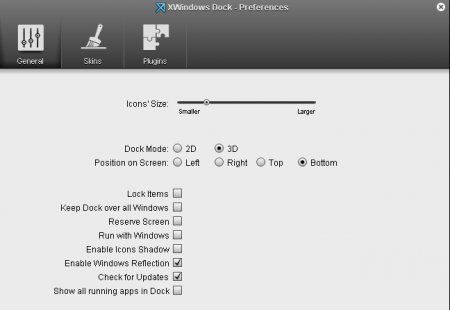 Now that you know all about XWindows Dock, you can use this free application launcher to give a new look to your desktop, and make launching programs easy.