This tutorial explains how to install Android L Keyboard on any Android 4.0 (and upper) device.

Google recently introduced the developer preview of Android L in its latest I/O. I have installed it on my Nexus 5, and it looks awesome (more on that sometime later). One thing that I liked most in Android L is the completely revamped keyboard. Keyboard in Android L works a lot like SwiftKey keyboard (which recently became free). Some of my friends saw the keyboard and really wanted it. And guess what, I found on xda that someone has actually extracted that keyboard from Android L and has made a separate app for it. This keyboard is now actually available on the Play Store and you can install it on any Android device running Android 4.0 or above. So, you don’t have to wait to get Android L to get your hands on this keyboard.

This new Android L keyboard certainly looks gorgeous, fully embracing Google’s “Material Design”. The keyboard predicts the words, and they appear as floating previews while you type using swipe gestures. The predicted words get updated in real time, and can be added to your dictionary with two taps. The gesture typing retains its accuracy and learning abilities from the earlier iterations of Google keyboards. 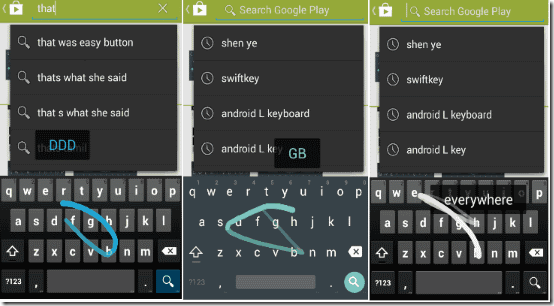 The following tutorial details a step by step process to install the Android L Keyboard from the Play Store, on any Android device running Android version 4.0 (Ice Cream Sandwich) and up. However, before proceeding, make sure you have at least 60MB of internal storage is free on your device.

I have tested this Android L keyboard app on three devices:

It worked perfectly fine on all the devices.

How to Install Android L Keyboard on Previous Versions of Android: 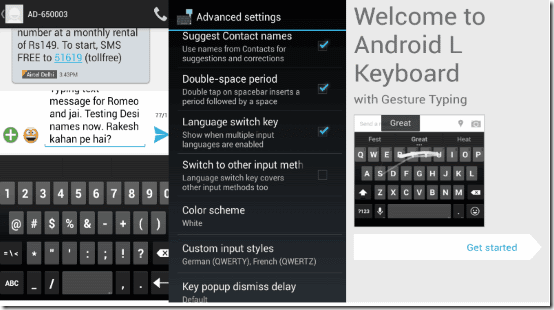 The Android L keyboard looks and feels amazing. I have been using it for over a day now and I don’t want to go back. Every keyboard I have used before Android L’s, feels boring and archaic in comparison. Although it is clearly inspired by Swiftkey (and Touchpal), but Swiftkey comes with added (and at times, pointless) extraneous features like extra keys, and confusing layouts. This is where Google’s Android L keyboard takes the prize. It has nothing more than it should have. It’s simple, and to the point. There are no unnecessary lines between the keys, the virtual keys are well designed, and just the right size. Android L Keyboard doesn’t eat up all of your screen real estate, and consequently, provides a spacious layout (if you have a small screen, try this). I never really liked the way default keyboards looked and acted in the earlier Android versions. However, the Android L  Keyboard has fixed that deal breaker.

The Keyboard setting can be accessed through the keyboard by holding down the comma (,) key. This shortcut even lets you change the keyboard’s language. Once in the settings, you can customize settings like vibration feedback, automatic prediction and shortcut settings. You can add (or remove the added) words from the Personal Dictionary in these settings. 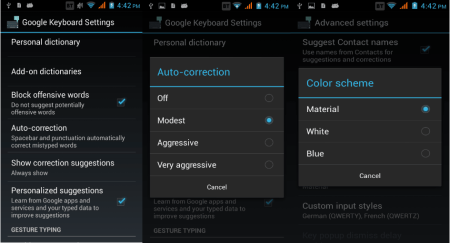 The settings also let you switch the sound feedback on key presses on or off. The default sound that keystrokes produce resembles that of a typewriter and it sounds super cool.

The default layout is a Blue theme that looks like a normal keyboard. I strongly suggest you switch to the Material theme, to use this keyboard in its full glory. You can switch on the material view from Google Keyboard Settings, Advanced Settings > Color Scheme.

Android L Keyboard also lets you switch off the pop-up on key press. Toggle the Phrase Gesture and Gesture Trail on or off from Android L’s settings. There are 4 levels of Auto-Correct you can choose from in the keyboard settings. 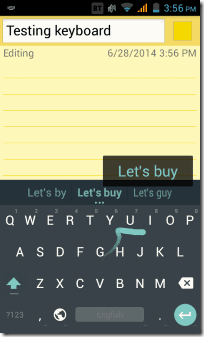 Now you can type entire sentences by gliding over the space key between words. You can even choose whether you want the prediction to be based on (just the gesture, or the previous word too). It’s comfortable when used in landscape and there is no option to split the keyboard in two. Oddly, word suggestions  don’t appear while typing a URL in a browser.

Google’s Android L Keyboard is an example of the transformation the company is going through. Design and functionality are working together. Subtle options like personalized suggestions (e.g. To erase user’s data on typing habits) show the thoughtfulness of the developers while developing the app. For me, this is the Android keyboard that I’d been waiting for. Whether it’s the one for you or not, simply head over to the download link to find out.

Get Android L keyboard here, or scan the QR code below: