TorBox is a free VirtualBox machine which contains the Ubuntu GNU/Linux operating system installed within it. This system isn’t an ordinary Ubuntu installation, it comes completely optimized and configured to work with Tor. The entire machine can be downloaded from the Internet and in order for you to start using it, it just needs to be imported into the VirtualBox virtual machine manager, which we’ve talked about before. 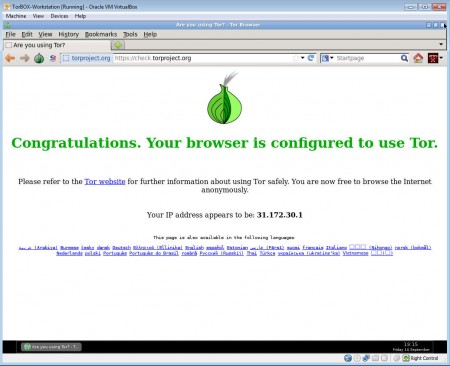 There’s actually two different virtual machines that you have to download before you can use TorBox. One is called Gateway while the other one Workstation, both of them are needed in order for you to be able to see what can be seen on the image above, Tor browser (Firefox 10) working inside the TorBox workstation. Like we mentioned already everything is configured automatically with some very useful plugins being included in the Tor browser. Other interesting things that you get with TorBox would be:

Note that these virtual machine images are rather large, both of them are around 800MB in size, so you if you don’t have a fast internet connection or if you are limited when it comes to traffic, you might have to find someone else to download it for you.

How to use TorBox – free Tor VirtualBox machine

To use TorBox and protect your online identity you’re gonna have to have VirtualBox installed, which is available for all major operating systems. After downloading the two images, open up VirtualBox and select File >> Import Appliance. 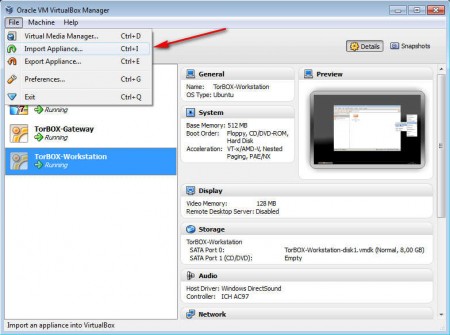 After you do that both of the images should appear in the list of virtual machines that you can run. First start by starting the Gateway machine. This machine doesn’t have an interface, it will just act as a relay to which the Workstation machine is gonna connect to. After the Gateway machine is fully loaded, start up the Workstation machine and that’s basically it. The machines are gonna be communicating on their own, without you having to change settings. 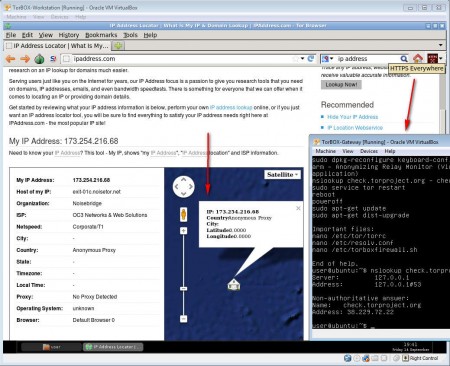 As you can see from the image above, out location is somewhere out in the sea and our country is listed as Anonymous Proxy, which is what Tor does, it hides our online identity, for those who didn’t know this and were wondering what exactly TorBox is and where it can be used.

Depending on where you are in the world, censorship can be a big problem. There are countries which are blocking content and with Tor you can easily bypass the filters and blocks that they have placed on popular websites like YouTube, Facebook or thousands of others. Companies can also do something similar, although using TorBox at the company might be a bit problem, because installation is also blocked, and you need to install VirtualBox. In this situation, use the portable Tor Browser which you can find on the project’s homepage here.