Sea of Chaos is a 3D shooting ship game available for free PC download. Want to experience a sailor’s life and defeat the pirates? Try this ship game.

In this ship game you can play with different ships, shoot with different guns, and it has multiplayer option too. Sail your boat like a captain and enjoy the game.

You play the role of Captain Chaos; the most admired leader in his home Oppenheimer. Protect your country from a bunch of pirates; who are trying to attack your country.

You have a big fleet and followers too. One day a news came from far away merchant of a vast country named Vandamour. Captain Chaos was informed that a big Vandamourian fleet is coming towards them to conquer their country. So, prepare your ship and face the enemies bravely.

The modes available in this ship game are:

1. Single player: This is a single player mode. Your 1st mate is the trainer for you. As soon as the game starts he will give you instructions on how to drive the ship and shoot. Just follow his narration which will be shown in the form of text on the top as shown in below screenshot. After your training you will be defeated by a pirate for sure. Don’t worry; you are meant to be defeated and take revenge later. Just go through the game and follow the story.

While completing stages you will be given some upgrades. Just use them in the option, outfit ship available after completion of every stage. In that you can modify your ship’s Hull Parts, Engine parts, Gun parts, and Cannon parts. Don’t forget to save after every stage or in the middle of the game; because there is no auto save option available. Just complete the missions to unlock upgrades and next stages. 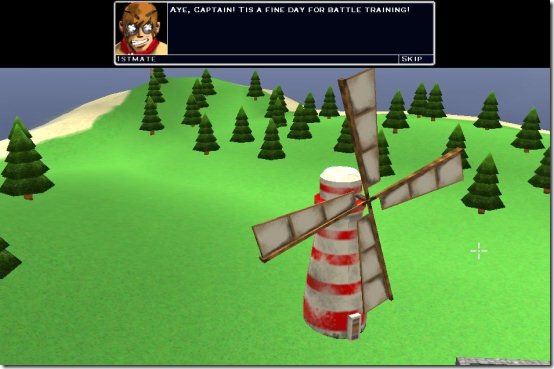 The controls will be told during the narration. But I’m mentioning a few of them here; which are mostly used. 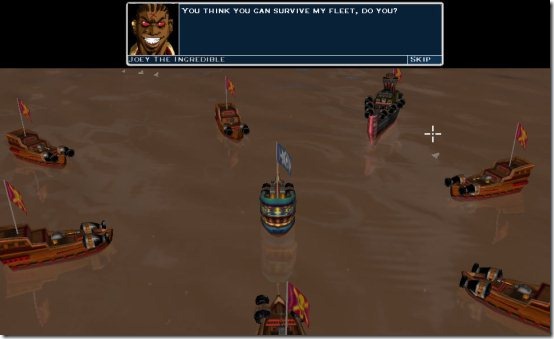 I have been looking for a nice free ship game and I found this. If you have any other suggestions please let me know in the comments section below. This is a small game with limited gameplay; but worth playing. The graphics are little outdated; may be because the game size is just 37MB.

Want to be a captain of a fleet of crusaders, then click here to Download Sea Of Chaos.