Desktop Intray is a free desktop organizer which you can use to easily clean up desktop clutter that most of us are guilty of having. We usually download various different documents and files and just leave them on the desktop. Desktop Intray will organize files that you have thrown all around your desktop by sorting them each into its own folder based on their file type. 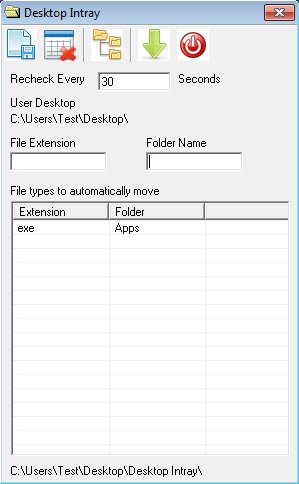 This free desktop organizer is a portable application, which doesn’t have to be installed. It also starts minimized to system tray, so don’t think that it’s not running. Control panel from the screenshot above can be accessed by right clicking on system tray icon and selecting Settings. Top left corner holds a menu for saving settings that you change down below and for controlling the file organization process.

To leave you with the choice of organizing desktop files, if you want them organized or not, Desktop Intray will not manipulate actual files from the desktop, bit rather it will create a special folder on your desktop where you need to move desktop files that you want organized. If Desktop Intray worked directly with your desktop, every file that you add to desktop, even the ones that you need to use right away would be moved, which is bit annoying. Here are few pointers to help you get started.

How to Organize and Manage Desktop Files with Desktop Intray?

Folder that we said is going to be created and will be called Desktop Intray. Before you move your desktop files to it so that they are organized and sorted by this free desktop organizer, you’re going to have to create file type rules and assign folders where the selected file type is going to be sorted. 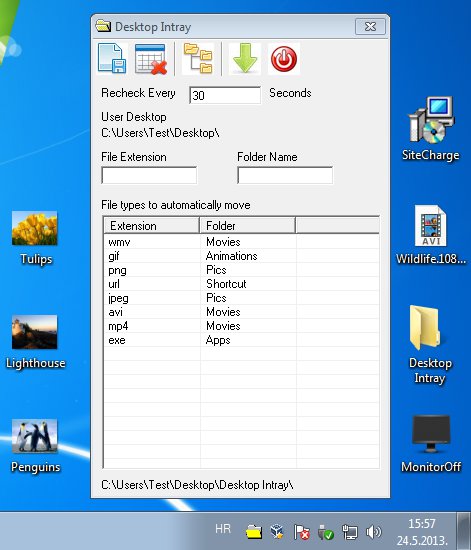 Right click on the system tray icon and select Settings. That’s going to open up the main window which you can see above. Interval in which Intray will check if there are any new files in the folder can be set at the top. Down below, the two fields, File Extensions and Folder Name can be used to set how the files are going to be organized. To move all the JPEG photos to a folder called Images set File Extensions to “JPEG” and Folder Name to “Images”. 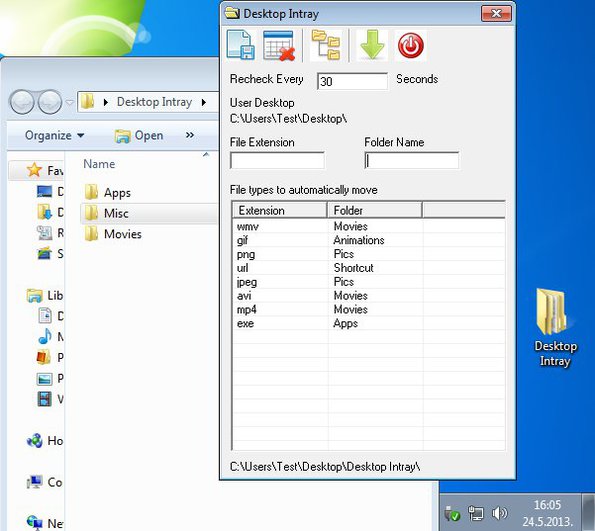 With the file type rules setup, click Save button at the top and move (Cut) the desktop files that you want organized to the created Intray folder. They should be organized each into its own folder, like ours were, as shown in the image above.

If your desktop is riddled with files, and you need help cleaning it up give this free desktop organizer a try. Desktop Intray is easy to use and very practical. Go ahead and give it a try.