Flappy Wings is a free iPhone alternative to the super hit iOS game Flappy Bird. Yes, you read it right, yet another alternative amongst many that have flooded the app store since Flappy Bird was pulled down from the app store. The developers of the game have a goal to cure the addiction of the ones who deleted the original ones due to rage. It would not be wrong to say that game directly imitates the its original counterpart with a few cosmetic changes here and there.

The game features a bird who has to move between the obstacles for points. Just like Flappy Bird, it is also based on the good old ‘tap or die’ concept. 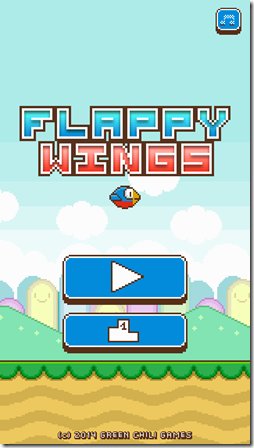 First thing I’d like to put up here is the music. Apart from the conventional flap sounds of the bird and occasional sound of the same hitting the ground, game has a fun background score going on. This is the first change I noticed in this game as I switched from the Flappy Bird. The music after a while gets repetitive and annoying though. Thank god for the button in top right corner which can switch it on and off.

Another difference this game has that the bird, as it crosses between the pipes, has to collect coins. Though they are of no significance though, an attempt to further connect it with Nintendo’s Mario is made. Also, it justifies the sound that is produced when the bird successfully passes one obstacle. One additional feature this game has the ability to share your score on Facebook and Twitter right from the game. We all like to boast about our scores, the developer was well aware of this fact. 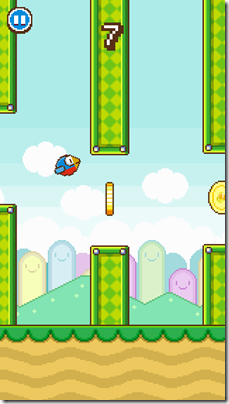 Another thing I’d like to bring up is that when your bird dies, restarting the game is just one click away. This is very useful if you are the type of gamers who don’t like to stop until they hit a particular level of score. The game also completely supports the official Game Centre leader boards. 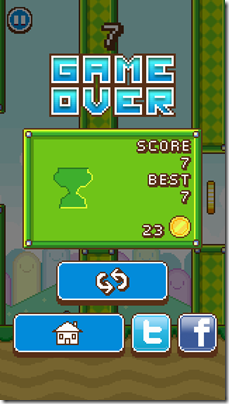 There is an occasional pop up in the game asking you to rate it. When you do so, you can unlock the different colors of the bird. So you can surely give it a try if you are interested in the color of the bird. The color of the pipes also changes after you cross every 10 pipes. 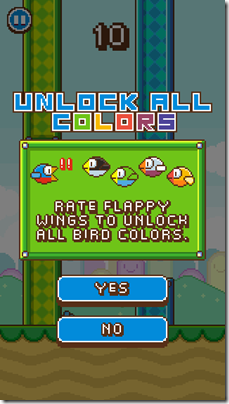 The game has been successful in connecting to me the same way Flappy Bird did. Though the originality of anything is irreplaceable, this game has the potential of helping to overcome the sorrows of not having the original Flappy Bird anymore. Though, I found one thing pretty disturbing, the effect of bird pooping in mid flight. I wonder why that was added to the game. Also, with some extra features packed, it is a must try game.

You can get Flappy Wings for iPhone free from here.

You can also check out Flappy Bird alternatives for your Android devices here.