Here’s a list of 4 free window opacity software for Windows 10 which you can use to change the opacity of application windows on your Windows 10 powered device. Since Window 10 has been released recently, we can now officially play around with it and see what kind of customizations are possible. Something that’s really not such a terribly useful feature but still a fun way how to tweak windows, actual windows, as in application windows, is to make them transparent. Applications from the list down below allow you to do just that by letting you tweak opacity. Let’s see how do they work exactly. 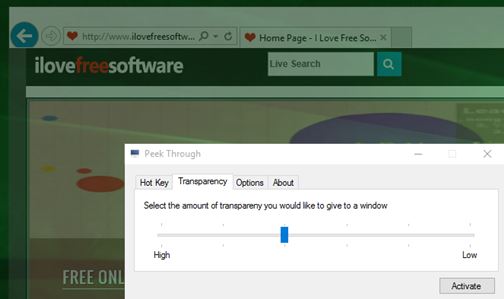 In the control panel you also need to setup the keyboard shortcut for activating the opacity on windows. Useful option available in Peek Through is the “click through” option, which doesn’t just make the window transparent, but also makes it so that it’s possible to click through it on whatever it is underneath the window.

Transparent Windows integrates a bit more into application windows, by adding an option for tweaking their opacity in the top left corner window management button, which most windows have. 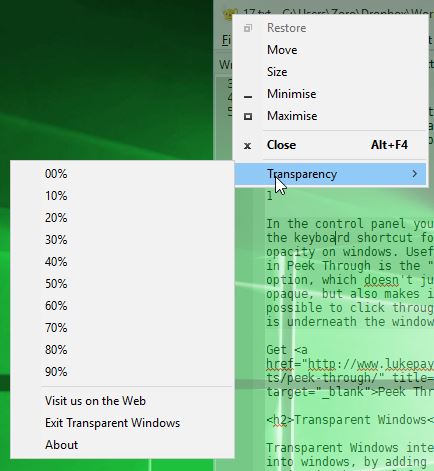 You can see this window opacity software in action on the image above. Opacity can be changed in 10% points using the “Transparency” drop down window. System tray icon is also available from where you can control the application, exit it, etc. Be careful during installation because there’s a couple of offers for installing additional application in the install wizard.

Also have a look at 10 Websites To Download Windows Themes Free .

Vitrite is yet another window opacity software for Windows 10 with a unique method of controlling the opacity. Here you control the window transparency using a combination of Ctrl + Shift + 1-0 keys on the keyboard. Each keyboard key between 1-9 sets a different level of opacity and 0 turn the opacity off, meaning the window goes back to normal. 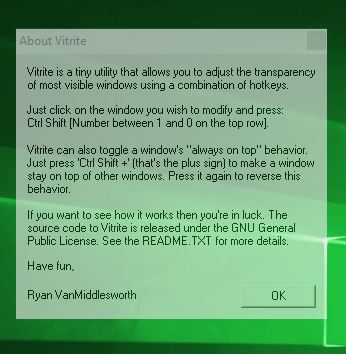 Example of opacity set to 3 can be seen on the image above. You just need to hit the appropriate key combo, in this case Ctrl + Shift + 3 and the opacity will change right away. Hit Ctrl + Shift + 0 to make the window opaque again. Application adds a system try icon from where it can be controlled.

GhostWin is a window opacity software that’s very similar to Transparent Windows, the second application from the list above. It also integrates in the top left corner of application window, where the move, minimize and restore options are situated. 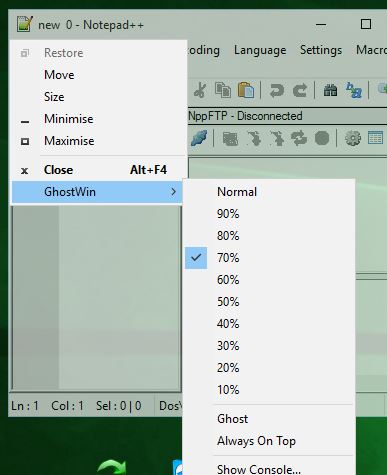 From the GhostWin option which is put there by the application, using the drop down, you can change the opacity of the program window 10% points at a time. If you want to go back to a fully opaque window, just make sure to click on the “Normal” option.

Also have a look at How To Use High Contrast Themes In Windows 10.

I haven’t had any problems with any of the 4 window opacity software for Windows 10 that I tested, but note that windows of some applications might not work, if they are using different themes, frameworks, etc. I suggest that you use either GhostWin or Peek Through because these two apps seemed to work best with most applications that I used during testing. Leave a comment down below and tell me what you think.