Here’s a list of 4 desktop notification apps for Android which you can use to read notifications from your Android phone on desktop computers. Sometimes when working on a project we don’t have the time to always keep an eye on what’s going on with the phone. If you’d like to setup and receive notifications on your desktop instead, so you don’t have to break focus and look at the phone screen, then the following apps are for you. 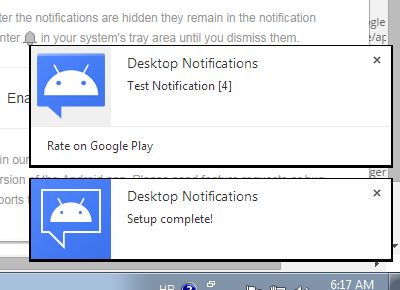 First app that I tested has a very descriptive name, Desktop Notifications. It works not just with desktops, but also with other Android devices.

App works by connecting with your Firefox or Google Chrome web browsers (using Gmail ID and a special confirmation code) with the Android app. Because web browser addons are used, installation is very simple, non-intrusive and this will work on every operating system where Chrome or Firefox can be used (Linux, Windows, Mac, etc.). After setting up both the account and the confirmation code, notifications will start showing up on the desktop, just like they are on the image above. Same thing is true for any other Android device that you might have hooked up with Desktop Notifications. 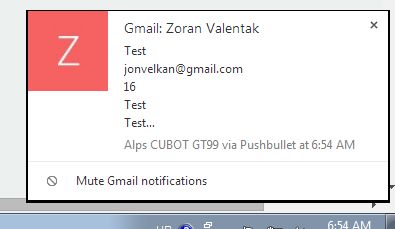 Pushbullet is much more than just a desktop notification app. It can actually be used to send notes, links, addresses, lists, pictures and files between your devices.

Desktop notifications work by default, they are a given. To share all the other stuff between your desktop and your Android device, you’ll have to open up the Pushbullet Android app and manage everything that you want to send from there. Authentication is done by registering an account with the Pushbullet website. Then logging in with your account to both the Android app and Firefox/Chrome addons, or alternatively if you use Windows you can install the Windows desktop app. 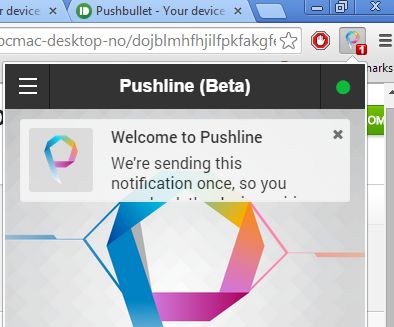 I liked Pushline:Desktop Notifications mainly because of the apps simplicity, but it does have some drawbacks, at least when it comes to me.

Only Chrome extension is available for pairing up between the app and desktops. Since I’m a Firefox user, I feel a bit left out, but this desktop notification app is still in development, so Firefox extension might still be in the works. To pair up two devices you only need to get the authentication code from the Android app. As soon as you do that, every notification from your Android device will automatically show up in the top right corner of Chrome, see image above. 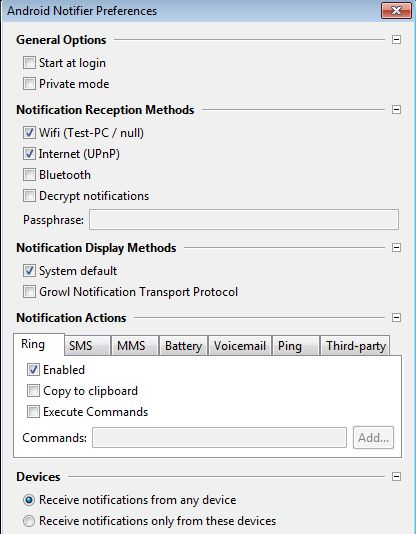 Remote Notifier for Android is added to this list because this app isn’t tied to web browsers. It actually has desktop clients for Linux, Windows and Mac that’s used to receive notifications.

In other words, you don’t need to have the web browser running to receive notifications. App works via LAN/Wifi. Devices are automatically detected and setup and as you can see, the desktop app is very configurable.

Get Remote Notifier for Android.

Also have a look at Get Android Phone Notifications on PC with Remote Notifier.

I like Pushline and Pushbullet the most because they seem like the most feature rich (Pushbullet) and most easier to setup (Pushline). Others aren’t that bad, especially Desktop Notifier if you need something a bit more advanced features. Let me know what you think in comments down below.