Here’s a list of 3 free Android apps which you can use to give iOS look to your Android smartphone or even a tablet. iOS powered devices, in other words Apple products are very popular, but sadly because of their prices they are also unattainable to a lot of people out there. All these apps can be downloaded for free from the play store.

With the following 3 apps you can turn your Android into iOS for free, and that way fool yourself that you actually do own an iPhone or iPad. 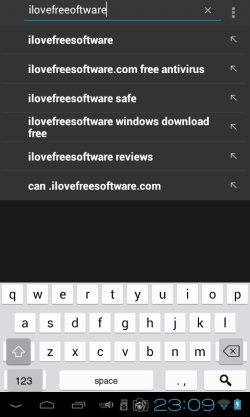 The way that we’re gonna be giving the iOS look to Android is in steps, three of them to be more precise. In the first step we’re gonna change the keyboard that the system is using so that it looks like the one that’s used by iOS.

To do this, we decided to use an iOS themed keyboard from the Play Store called iPhone Keyboard iOS 7. We’re using it on the image above. Theme has the usual white color that’s used by iOS. It’s installed like any other keyboards, you first have to activate it and then set it as the default keyboard and it’s gonna replace your standard keyboard. 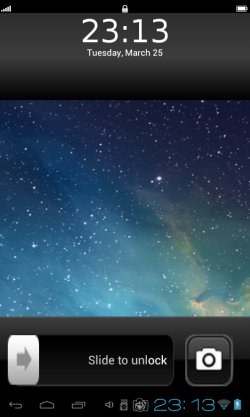 Next app that we used is called iPhone 5 Lock Screen iOS 7 and it lets you change the lock screen of your Android device into a lock screen that’s used by the latest iPhone 5 and subsequently iOS 7.

When you run the lock screen app for the first time, you’re gonna be able to configure how the lock screen is gonna look like. You’ll be able to select between several themes. Preview is available so that you can see how exactly a certain theme is gonna look like before actually applying it. Theme basically changes only the background image. When unlocking, there’s a quick shortcut to open up the camera right away, if you need to snap a quick pic. 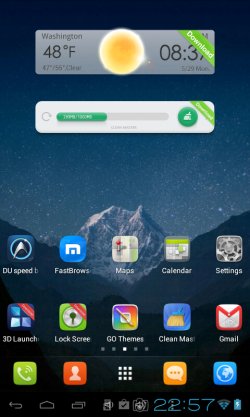 Last thing that we need to take care of is the actual interface, how the menus and the launchers look like. Changing these was also easier than what one might hope it would be.

Using iOS 7 GUI Theme you can quickly change launchers, icons and how the menus that list currently installed apps and widgets look like. How everything is gonna look like can be seen on the image above. Some of the icons that get installed won’t actually work, they are just added as suggestions for what additional apps you could install to make the theme work better. Note that when you install and run iOS 7 GUI Theme it will change all of the previously mentioned, launcher, icons, etc.

There’s a lot of apps for turning Android into iOS, but a lot of them are paid. If you were wondering if there’s maybe a way of how to make Android look like iOS without spending money, then now you know that there is. If you have any suggestions or ideas of your own, leave them in the comments down below.