This is a list of 4 free Android apps to see Hubble images. These apps let you easily browse through the vast collection of stunning images captured by Hubble Space Telescope. You can see the Hubble images, read descriptions, bookmark, add images to favorites, share with others, download images, etc. In addition to that, you can also set the amazing Space images as your Android wallpaper. That means if you would like to display a beautiful image of the Space on your Android wallpaper, then these apps can help you do that, as you can do with NASA wallpaper apps.

If you’re aware of Hubble Space Telescope, then well and good and if not, then let me explain it briefly for you. Hubble is actually a Space telescope which observes visible-light in the Space and can capture extremely high-resolution images. So, if you love browsing and viewing images of Space, then these apps can bring those images which are captured by Hubble Space Telescope right on your Android phone. 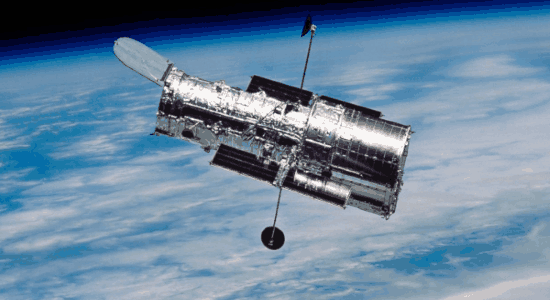 Let us get started with the Android apps to see Hubble images. 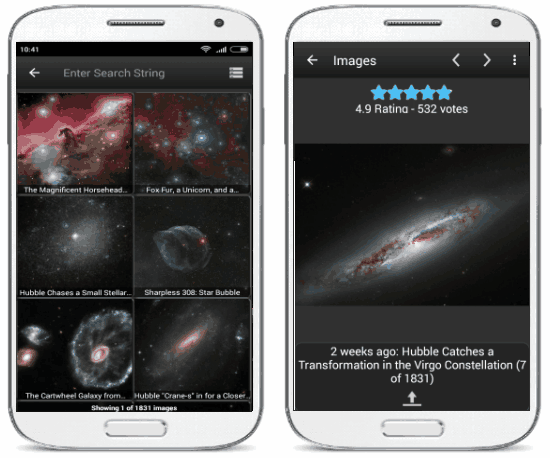 NASA is undoubtedly the best app to explore and know what’s happening in the Space, as it offers dozens of feature stories, videos, news, NASA TV live streaming, tweets, mission information, etc. Apart from that, it also comes with a huge database of stunning images captured by the means of International Space Station (ISS), Hubble Space Telescope, etc. So, if you’re looking for an app with a vast collection of images by Hubble Space Telescope, then the NASA app is your one-stop solution.

You can simply open up the app and then tap on the “Images” grid to see all the images by NASA. However, if you would like to specifically browse the Hubble images, then type “Hubble” in the search field and it will instantly show you all the Hubble images. You can then tap on any of the images to see the description, save image, favorite, bookmark, share, and even set the image as your wallpaper. 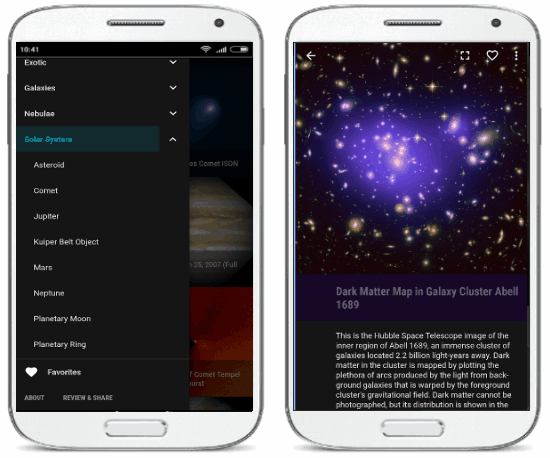 You can easily navigate through the images by sorting them with highest resolution and popularity. Similar to the NASA app, you can save links to images, favorite them, download, share, and set as wallpaper of your phone. The image source of this app is HubbleSite, which is run by the Space telescope Science Institute’s Office of Public Outreach. 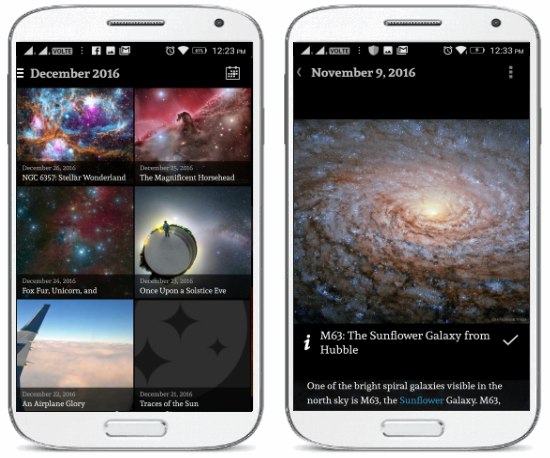 APOD app also comes with a huge database of Hubble images which are captured over the decades. APOD is actually the abbreviation of “Astronomy Picture of the Day” which posts a single image by NASA on daily basis. All the images which you can see in this app are hand-picked by the astronomers of NASA. Unlike the “Hubble Gallery” app, the entire database doesn’t contain Hubble images only, but also the images of Space captured by any other means of NASA. You can browse through the images which are sorted by dates, view them, read descriptions written by pro astronomers, download them, set as wallpaper, share with others, and favorite images. 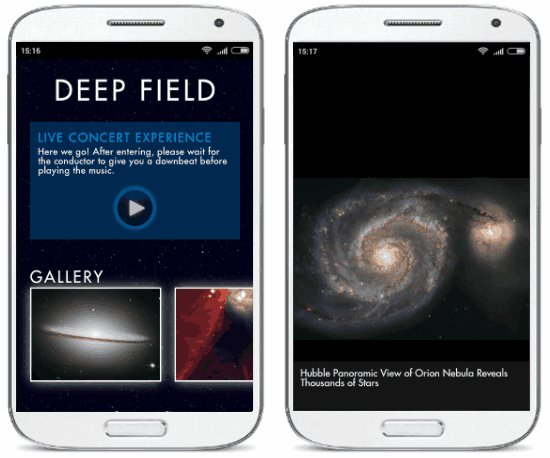 After you open the app, you will see a section named, “Gallery” which contains all the Hubble Deep Field images. You can simply view the images by tapping on them and also read the description of the images. Unfortunately, you won’t be able to download or share the images.

All the apps explained in this post are perfect for exploring beautiful images by Hubble Space Telescope. Personally, I like the official NASA app as apart from images by Hubble, you can also see videos, read feature stories, access to NASA TV, mission details, and more. You can also download the images, share them with others, and even set as your phone wallpaper.

Go through all these apps and let me know which one is best for viewing Hubble images in the comments section below.