Snake on 8 or simply Snake, is a free Windows 8 snake game app. The game play of this lightweight Windows 8 game app is just as the original, and that is to trying to eat up every  food that appears in the bordered plane (playing area), and avoid hitting any of the border and it’s own body. The game is a casual video game, where you have to survive the longest and achieve the highest score possible. Sounds like just every other regular snakes game that you play in other gaming devices. However, the thing that makes this Windows 8 snake game different from others, is the playing board where you’ll play. The board actually moves while you play the game. Which makes the game fun and different, and you’ll realize this when you play it. 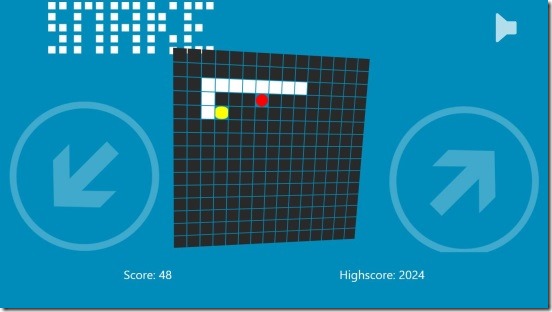 Just like the original, this Windows 8 also stands up to the good gameplay mark. It has got a really good gameplay. There’s nothing too complicated and no sudden twists in the game. All you have to do is control the snake movements and eat the apples (which are dots) on the playing board, while avoiding hitting any border around the board or hitting itself. The good thing is the game is supported in all Windows 8 devices, including both touch and non touch devices. For the desktop users, the game is bit easy, because they can use the four arrow keys to direct the snake. Or, they can also simply click on the two control buttons; present on both sides of playing board. While for the users who are playing the game in Windows 8 touch devices; they can tap on the aforementioned control buttons, and control the snake. Another good thing about this Windows 8 snake game app is, it runs in offline mode so, you don’t need to be connected to the internet all the time, and also this app, occupies a very small space in your Windows 8 device’s hard disk.

Besides just eating apples and avoiding hitting anything besides apple, there’s one more thing that you have to take care of, and that is: you have to adjust your gameplay according to the movements of the playing board. The board continuously moves during the gameplay, giving it a 3D effect and making it a bit hard for you to survive and eat the apples. Still, once you get a hold of it, you are quite good to go. The game also saves the highest score achieved till the current time. And keeps showing it on the bottom right side of screen, and continuously reminds you of the target to achieve.

Following is a screenshot of the game paused when snapped. 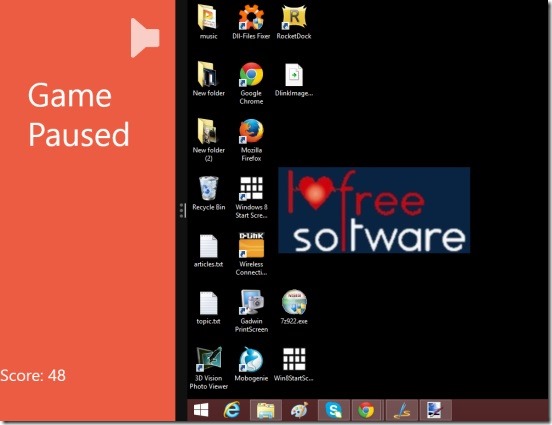 Snake on 8, absolutely is a good Windows 8 snake game app. Good gameplay, easy controls, moving board, good sync between controls keys and their respective actions etc. are the few things that makes it a good candidate to play. Besides that, it runs smoothly without any lags or crashes. All in all a good free Windows 8 game. Grab Snake on 8 here.