Angry Birds is a famous game and four main versions have been released till now. They are Angry Birds: Seasons, Rio, Space, and Star Wars. All of them are a big hit and all of them are developed by Rovio Entertainment. This game which you are going to read about is a different version. So, try this F1 themed Angry Birds and have fun. 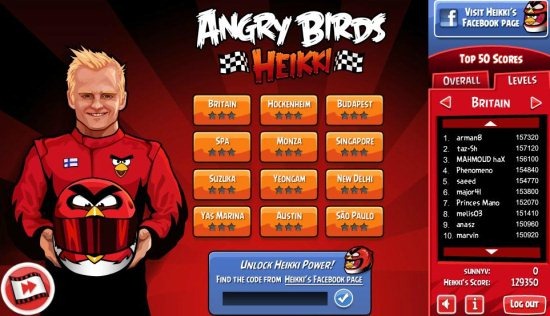 Angry Birds Heikki is designed in a F1 theme. In this Angry birds game also you have to target Angry birds to kill the Piggies. The piggies are located in the playing field; which looks like a F1 race course with pit stops, etc. The Angry Birds in this game have super powers like that of the Angry birds which belong to the first version, Angry Birds Seasons. Let’s have a deatiled look at this version.

As soon as you open the website, it will ask for a login. You can register using your mail account and the process is easy. Just input your email account, choose a password, confirm the password again and choose a nickname, and that’s it you are done. Now you can start playing Angry birds Heikki. Angry Birds Heikki contains 12 stages: Britain, Hockenheim, Budapest, SPA, Monza, Singapore, Suzuke, Yeongam, New Delhi, Yas marina, Austin, and Sao Paulo. Just complete all these stages and score high to reach the top 50 scores that are being displayed on the right side of the game. 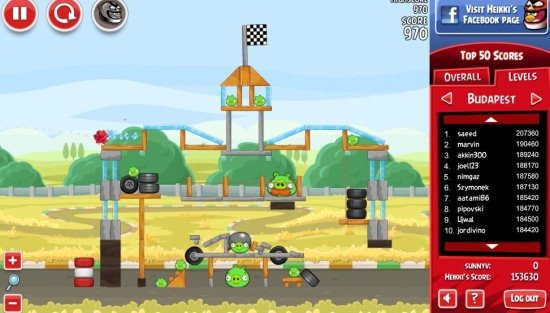 In Angry Birds, the Piggies are arranged in random places or hiding behind walls. Your aim is to shoot the Angry birds using the catapult. Just pull the catapult and shoot in proper direction to kill the Piggies. Sometimes you can use TNT’s to blast the Piggies or some obstacles to kill them. Each Angry Bird has a special power and it is your duty to use them appropriately to shoot at the Piggies. If you shoot the Piggies using less number of Angry Birds than provided, then you will get 10,000 extra score for every Angry Bird that you have saved. So, score high and reach the top fifty scoreboard.

Angry Birds Types: The Red Angry bird can just shoots itself in the direction you aim at. The Yellow bird when in middle air, click once to shoot it in that direction at faster rate. The blue color birds when shot once, click to make them split into three birds. The white birds can drop an egg and fly away when click at a proper position. The black birds blast themselves when they settle at one place.