Drag and Drop Robot is a free mass file management software for Windows where with the help of configuration files and the command line you can automate and perform various different actions on files and folders. You’re gonna have to write command prompt commands directly for the applications that you’re interested in using. After that Drag and Drop Robot will allow you to execute those commands on a large number of files and folders at once.

What this free mass file management automatization software does is allow all those who are more comfortable with the command line, to write special configuration files, seen in the top left corner on the image above, and then run those commands on all the files and folders added to the Queue down below. An example of a command to ZIP up files and folders is this:

To setup a command like this, you’re gonna have to read up on how the application that you plan on using works. This means that you need to find out which triggers are used after the executable to make the application work a specific way. On the command above triggers would be -a, -r and all the rest. 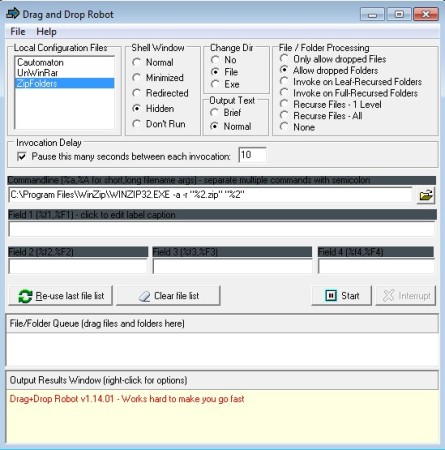 Key features of Drag and Drop Robot are:

First thing which you need to do we have already mentioned above, find out how the command prompt version of the action that you would like to perform with an application looks like. Read the documentation of the application, if it even supports doing something like this. After you have the command, add it to the command field in the center of the window. 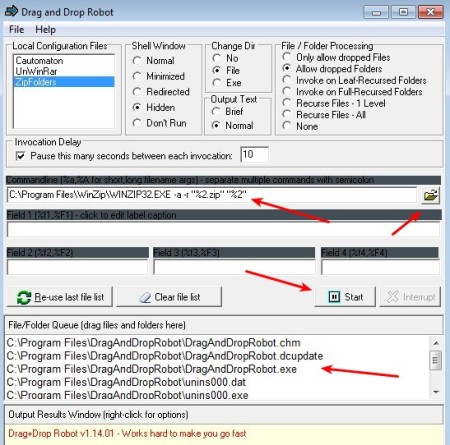 Rest of the fields that’re available are for additional trigger that you want to pass to the selected executable. Clicking on the open file folder icon you can select batch scripts. Drag and drop the files to the queue down below. If you want you can save the created command by clicking on File >> Save Configuration File. When you’re done, click on the Start button and the command that you’ve entered will be applied to all the folder and files that you have added to the list.