This article explains how to see preview image of tabs on hover in Chrome. If your daily work involves opening many Chrome tabs at once then you might have been in situations where it gets confusing which tab is which. Google Chrome tried to address this by showing tab cards when you hover over a tab. But that might not be enough for many users.

There is another hidden feature in Chrome that lets you preview an image of the tab by hovering your mouse cursor over it. This feature is available through Chrome flags. When enabled, it replaces the default card view with an image of that tab along with the tab title. You can follow the steps mentioned below to enable this feature.

Also read: How to Use New Tab Groups in Chrome to Sort Tabs?

See Preview Image of Tabs on Hover in Chrome

To see a preview image of tabs on mouse cursor hover, you have to enable the respective feature from Chrome flags. This feature is available in all the builds of Google Chrome, Stable, Beta, Dev, and Canary. You can enable is easily in Chrome despite the operating system you are using. 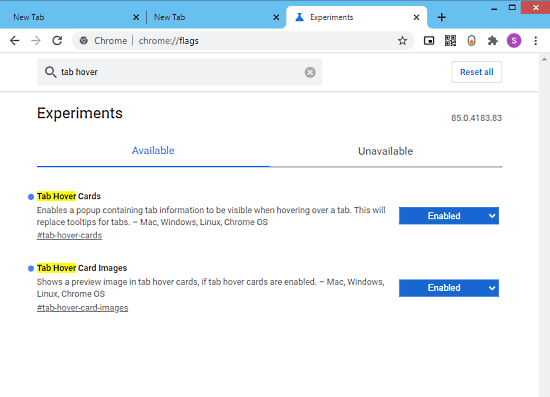 To enable tab image, open Google Chrome browser, and type chrome://flags in the address bar. Press enter to open the flags page. On the flag page, type “tab hover” in the search box at the top. Then look for a flag named “Tab Hover Card Images” in the resulted flags. This flag is set to “Default”. Click on that and change it to “Enabled“. 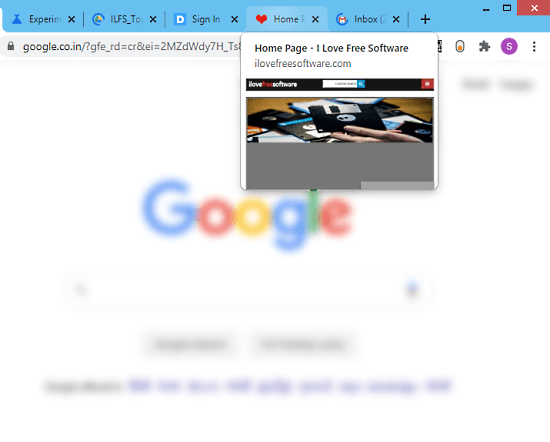 After changing the flag value, relaunch the browser to make it effective. Once done, you will get a preview image of tabs whenever you hover your mouse cursor over them. You can see a preview of this in the screenshot attached above. As you can see, it shows a card with the image of the tab along with the title.

This is how you can see a preview image of tabs on hover in Google Chrome. This sneaky feature would be handy for those who deal with numerous tabs simultaneously. With this enabled, you can easily distinguish between tabs even they are on the same domain. Try it yourself and share your thoughts with us in the comments.