This tutorial explains how to rename group of tabs set aside in Microsoft Edge. Earlier, with Creators Update, Microsoft Edge came with feature to set tabs aside, which helps to save all opened tabs for later use and restore them when needed. All opened tabs are saved in a group and then you can open more tabs, set them aside and create another group. Though the feature is fantastic, there wasn’t any option to rename the tab groups. Even Fall Creators Update and April 2018 Update of Windows 10 didn’t come with any help. But thankfully, it is now possible to rename groups of Microsoft Edge tabs that you’ve set aside.

To do it, you need to access tabs set aside section, and then you can rename any tab group. This tutorial will help you. Before that, you can see the screenshot visible below. As you can see, only the total number of tabs present in different groups are visible and there is no option to rename them. 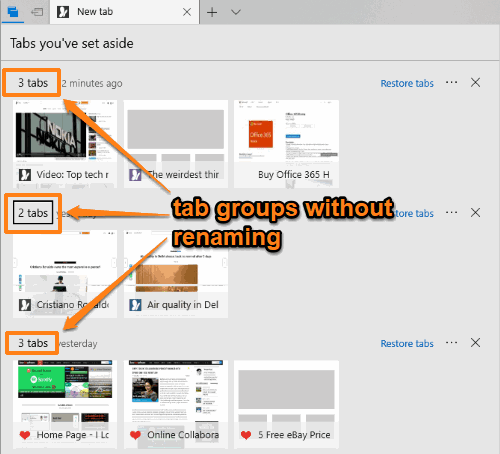 Now see the screenshot added below. I renamed two tab groups with the built-in feature of Microsoft Edge browser. 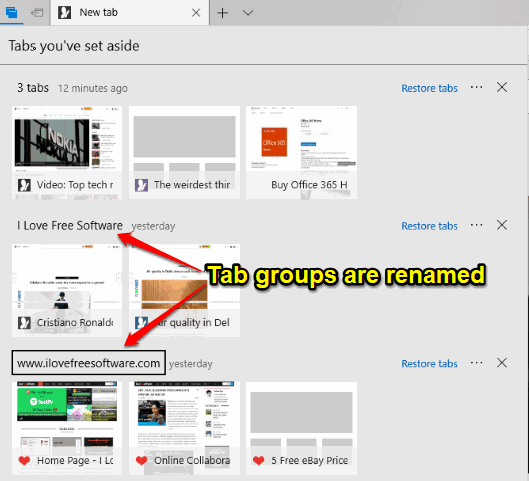 Now let’s check how this can be done.

How To Rename Group of Tabs Set Aside in Microsoft Edge?

Step 1: To rename group of tabs set aside in Microsoft Edge, you need to use 17677 preview build or higher of Windows 10. Those who are already using it, they can get the benefit of the feature. Those running April 2018 update of Windows 10 and don’t want to use preview build, they need to wait for the next stable update to use this feature.

That’s it! You have renamed a group of tabs under ‘tabs set aside’ successfully. You can do the same for other tab groups also.

Rename group of tabs set aside in Microsoft Edge is a useful feature for sure. It is gonna help those who have a huge list of tab groups in Microsoft Edge. By renaming any tab group, it becomes very easy to identify that particular tab group on that list.