Destroy Twitter is a free Twitter desktop client for Windows, Mac or Linux, written in Adobe’s Air runtime environment. Destroy Twitter is a very small and lightweight application, it comes packed with several different useful tools and features which will undoubtedly make your Twitter experience a lot better, for example you can filter tweets that you’re receiving, so that you can prevent people who are on a tweeting rampage from spamming your feed. 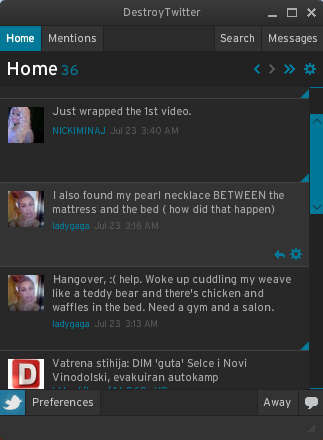 Like we said in the the introduction, Destroy Twitter requires Adobe Air to work, this is a great thing, because it means that you can use this free Twitter clients on all the major operating systems, it’s cross platform. List of useful features that Destroy Twitter has is very impressive:

Interface of Destroy Twitter is very modern looking, it will run in the system tray, like any other instant messaging application and it will behave like one too, sound and pop up notifications are there, and you can even send tweets from it to.

After installing Destroy Twitter it will start working right away, a login window will wait for you, where you need to surrender your Twitter login details. After you do that, you will be greeted with a list of tweets from your home page: 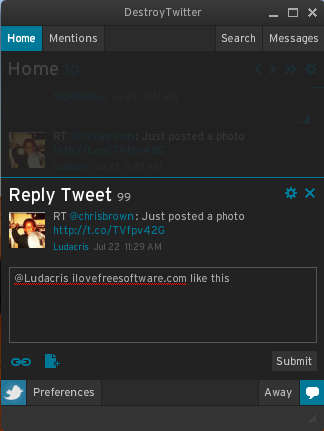 When you’re hovering over tweets, two different buttons will appear at the bottom right corner of the tweet, one of which would be the reply to tweet option which you can see above. Great thing about Destroy Twitter reply features is that it sports a spell checker which will underline misspelled word, and offer you suggestions for correction after you right click on it. 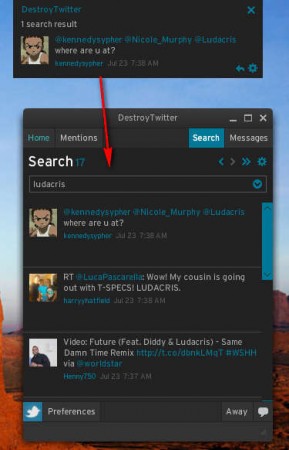 Next to being notified and reading new tweets with Destroy Twitter you also get the ability to track Mentions, search for friends, for those who have a lot of them and read Messages. Image above shows a user search which has yielded results and is now displaying both a list of tweets made by that user at the bottom of the window and also notifications above.

The other option which is offered to you when you’re hovering over tweets in the Home list would be the option to filter users who are constantly sending tweets updates: 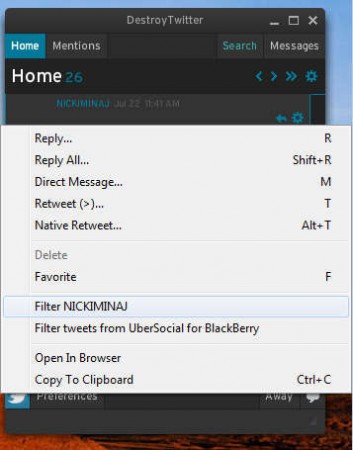 Here you can also re-tweet, direct message or reply to tweets which you have received. Destroy Twitter really owns up to its name, you can really completely avoid using Twitter from the browser by using this small Twitter client for the PC and Mac. It will not slow down you computer, and you can use it just like you would any other instant messenger. Minimize the main application to the system tray, and then simply wait for the tweet notifications to start coming in. Destroy Twitter is a free application, so if you don’t like it, you can just uninstall it.