Here is a tutorial that explains how to compare data between two Oracle databases, and how to synchronize differences between them. This tutorial uses a free tool called dbForge Express for comparing and synchronizing Oracle databases. Note: You need to have some Oracle client installed on your system to use this tool.

dbForge comes with a free Data Comparison wizard. This wizard will guide you through steps to compare data between two Oracle databases. Just start this wizard.

Step 2: Connect to Oracle Databases to be Compared

dbForge automatically maps tables of same names between the source and target schema. If it finds some tables that are in source but not in destination, or vice versa, it lets you create a custom mapping for those tables. The paid version also lets you create mapping at column level.

After completing the mapping, you can start comparison between selected Oracle databases. dbForge quickly completes the comparison, and reports the findings. This is where the real meat lies. The comparison results window of dbForge is designed in best possible manner. 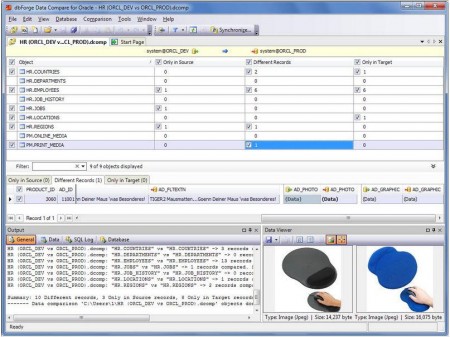 In this window, you will also notice that each table that has some differences has a checkbox besides it. This checkbox indicates that you want to include this table in the synchronization script that will be created later. In case you want to exclude some table from synchronization, you can uncheck the box for that.

This step takes away all the pain from manually synchronizing Oracle databases. Based on the differences that dbForge found in above step, it creates a synchronization script to be run against target database to bring it in sync with source database. Here you can see a summary of the differences that were found in a tree form. You can also choose to create the script here. You can choose to save the script to a file on your PC, or open the script in internal editor that comes in dbForge.

You also get an option to directly execute the script against target database, but I would not do that. I would instead choose to either save the script on my computer, or open in Internal editor of dbForge so that I can review the script before I make any changes to my DB.

Based on the option that you choose in above step, you can open the synchronization script in dbForge, or using some other PL/SQL Editor. You will notice that the script is completely standards compliant, and very easy to read. If everything looks fine, you can run this script in your target database, or edit it before executing.

These simple steps will remove differences between source and target Oracle databases, and make your oracle databases in sync. This tool works only with Oracle, and not other DB like Firebird.