FileGen is a completely free and portable software to quickly generate lot of files for testing. It is very easy to use and has just 1 screen of user interface.

What I find most powerful about this freeware is that it lets you add content to files based on variables. So, you can define variables for file content, and then provide values of the variables from other files. Consider it like mail merge for creating test files. 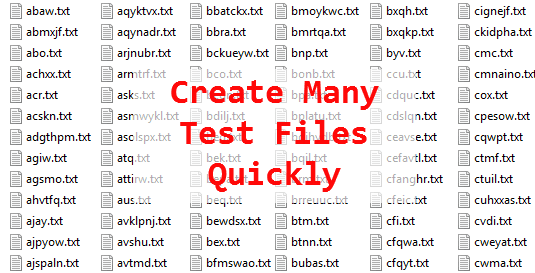 We earlier covered a similar software called FileFiller that is also meant to create dummy files of any size quickly. Even though that software is also good, but it did not give an option to specify file content, or place test files in different sub-directories. This is where FileGen exceeds.

Let’s see in detail how to use this software.

How to Generate Lot of Files for Testing Quickly:

If you are a developer who needs to test the software on a large number of files, then it is always tricky to create such files manually. Even though there are options out there to just create files with empty or random content quickly, but if you want some meaningful content in those files, then it is not easy. For example, you might be working on a software to find and replace multiple text strings together. In that scenario, not only you need to generate a lot of files, but you also want to add variable content to them, so that not all the content is same. All this is possible using this freeware to generate test files quickly.

Start by downloading this software from here. The software is very small in size; just 43 KB! Once you have downloaded the zip file, extract it, and run the exe. As I mentioned earlier, it is a portable software, and nothing is required to be installed. When you run it, you will see interface like below: 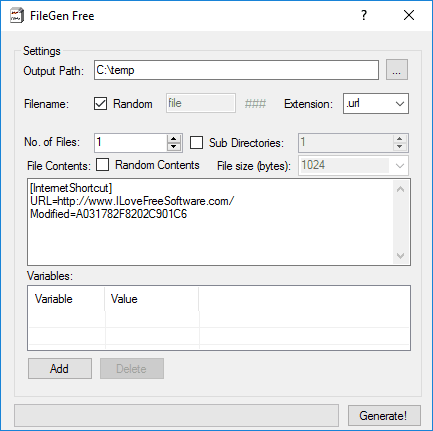 As you can see, the interface of this software is pretty intuitive. Let me still quickly walk you through the interface, and then I’ll let you know how to use this software to generate a lot of test files with different criteria quickly.

Now let’s see how you can use the above features to generate a lot of dummy test files quickly. I will cover 3 different cases here:

1. How to Create Lot of Test Files of Fixed File Size:

If you are looking to just create a lot of test files of a fixed filesize, then this software makes that pretty easy. Do following settings in the software for that: 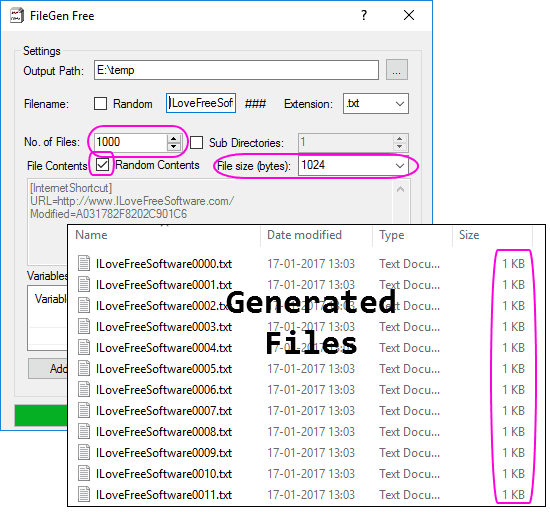 After this, just click on “Generate” button and this software will create those number of files with random text in them. The size of all files will be same, and will be exactly what you defined.

It is worthwhile to mention here that the above can also be achieved using fsutil command of Windows, by just putting that command in a loop. To do the same what I did above, the command would like below:

and this can be executed from command prompt. You can read more details of this method here.

2. How to Create Many Test Files with Same Content:

This is another use of this freeware: create lots and lots of test files quickly, with same content. Make following settings in the software for that: 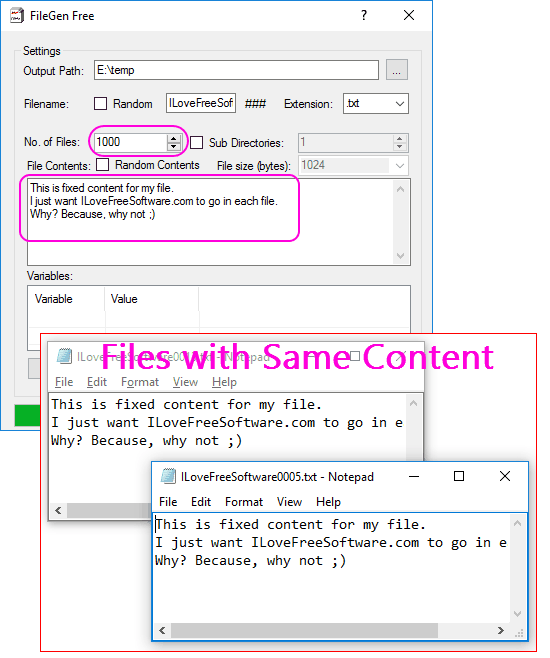 As you can see in the screenshot above, the files have exactly same content. This process was also quite fast.

Now, if you want to add a lot of text in your files, then there might be some limit added by this software. In that case, you could do a clever thing. Use this software to create files with as much content as this lets you. After that, use some free software to replace text in multiple files to replace any text with the remaining text that you wanted to add.

3. How to Generate Lot of Test Files with Variable Content:

I personally believe this is the most powerful feature of this software. You can generate variable file content by using different variables in your content. And the best part is that the values of those variables could be provided via separate files. For example, let’s say you want to generate 100 test files with same content, but in each file you want to put a different employee name and also name of the city where the employee lives. Then, you can define two variables in your content: one for employee name and another for city name. Then you can make separate files which will have names of all the employees and names of all the cities for those employees.

After that, you can use this software to generate those 100 test files with correct employee names and city names. This is like basically doing a mail merge on content.

Let’s go through steps to see how it is done. I will take the same example of employee name and employee city that I mentioned above.

Now, when I did this, I expected that data from all the files will be used in same sequence, especially if both the files have same number of values for the data. However, turns out that FileGen actually uses data in some random manner and does not preserve the order of data that is provided in the files. See the screenshot below.

The data in final files is not in the same order as in input files. I even tried giving exactly same number of data points as the number of files I was trying to create, still the variable replacement was pretty random. First variable could be replaced by first data point in the file, while second variable could be replaced by third data point. I did not expect that. I have even sent an email to the developer to confirm if this is the expected behavior and if there is a way around that, but haven’t heard from him yet. However, if you have just 1 variable in your data, and want to replace that dynamically with data in your list, then this should work fine.

I mentioned earlier that it has an option to create many test files inside sub-folders. Only parameter that you can specify for sub-directories is a number. I initially thought it would indicate how many sub-directories would be created and test files would be created inside them. However, this number actually denotes depth of sub-folders. So, if you give number 2, then it would create a sub-folder inside another sub-folder. However, it would create sub-folders randomly, so there would be some sub-folders which don’t have any sub-folder and some would have upto the depth you specified. So, it takes a random approach to that. I can see how that can be useful while testing.

I really like this software because it makes the process of creating lot of test files very easy. The software is easy to use and the interface is intuitive. When I started testing this software, I was most excited by its variable replacement feature, but when I discovered that the feature does not work as intended for more than 1 variable, I was disappointed. Nevertheless, you can still use this for adding just 1 variable and getting correct data in your test data. Or, if you want to get a lot of random data for different variables, then you can use substitution for multiple variables too.

All in all, definitely a useful software.