Swing Copters is another iPhone game from maker of Flappy Bird. The latest creation of Dong Nguyen, the developer behind the insanely popular Flappy Bird, Swing Copters is almost ridiculously difficult to play. Also available for Android, the game involves a little animated character being lifted upwards, with the help of a  propeller beanie hat. However, this vertical flight towards the top isn’t really smooth, as the character keeps veering from one side of the screen to another. And to make matters worse, there are also girders with gaps and swinging hammers that the character has to traverse through. Your objective is to keep the animated character flying upwards for as long as possible, as one crash means the game is over. To do so, you have to continuously keep tapping the screen at a consistent rhythmic manner. Sounds easy? Not really! Keep reading to find out more. 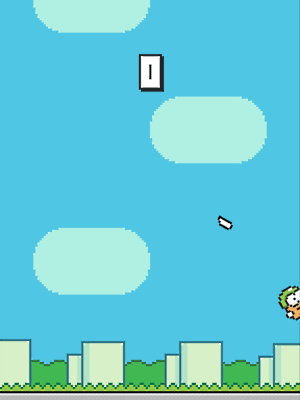 How To Play Swing Copters, By Flappy Bird’s Creator?

Before getting started, you obviously have install Swing Copters to your iOS device. Doing so is exceedingly simple. Simply hop over to the App Store, search for the game and tap the Install button. Once installed, you can start the game by tapping its icon on the home screen. The startup screen looks something like this: 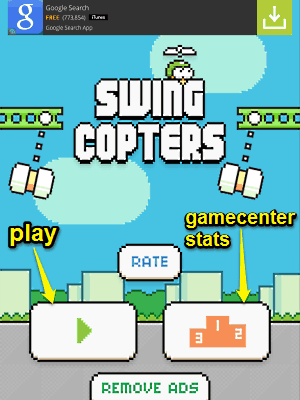 Looks familiar, right? Though not to everyone, but I’m sure the game will be almost instantly recognizable by those who have wasted countless hours playing Flappy Bird (or its alternatives). Just like it, Swing Copters also features a simple and retro looking user interface, resembling the arcade machines of the 80s. The startup screen has two big buttons: a play button to start the game, and a stats button to show your Swing Copter stats synced to your iOS Game Center profile. The game is ad-supported, though these can be removed by a one time IAP. Pretty simple stuff in here!

The thing is, this is where simplicity ends. As mentioned in the beginning of the article, this sucker is hard to play, really hard.

Here’s a little step by step tutorial to get you started with Swing Copters:

Step 1: Tap the Play button, and the game should start, with the propeller beanie hat character flying vertically upwards, swinging from one side to another as it does so. Check out the screenshot below: 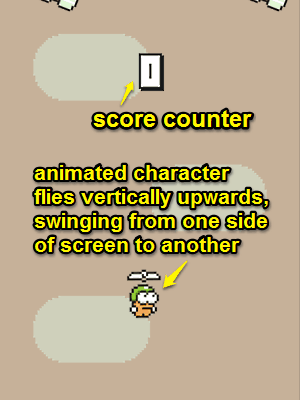 Now, all you have to do to keep this little thing moving upwards is keep tapping on your device’s screen in a consistent manner for as long as possible. The longer you keep the propeller beanie hat character flying, better your score is.

Step 2: As if the random swinging of the character from one side to of the screen to another wasn’t enough, there are also girders with gaps and swinging hammers that it has to successfully evade. One bump into these obstacle, and the game ends. 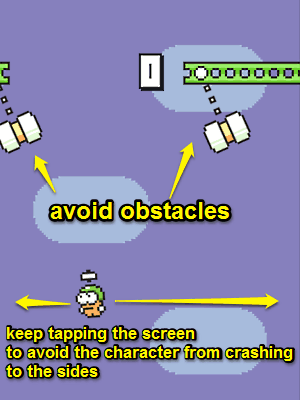 Step 3: That’s all there’s to it, folks! Though tapping the screen to keep a little animated character ascending  towards the tap might seem easy, there’s nothing easy about Swing Copters. The tapping motion has to be extremely consistent, and you need to have an extraordinary level of patience (coupled with a lot of time to waste!) to put up a decent score.

As of writing of this article, the highest score on Swing Copters is just 77!

Once the game is over, your current score, best score and medal won (if any) are shown. 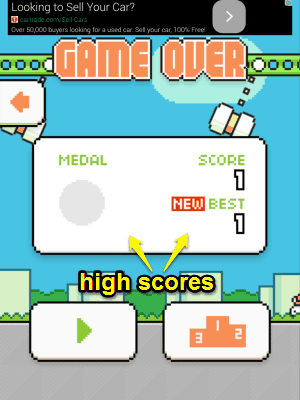 Swing Copters is a hard to play iPhone game from Flappy Bird’s creator. It looks like it’s been deliberately designed to be almost unplayable, just like its predecessor, Flappy Bird. While I personally don’t find Swing Copters to be a game that’s here to stay, I’m sure those who swear by Flappy Bird will find it great, even more so since it comes from the same developer who brought in Flappy Bird. Do give it a try, and let me know your thoughts in the comments below.

Get Swing Copters for iOS Here.