Kaspersky Windows Unlocker is a free registry scanner which is gonna look for any signs of malware infections and of course it’s gonna try and delete the problematic registry entries so that Windows can start working normally once again, for it to become unblocked. Ransom malware is specialty of Windows Unlocker, which is a good thing, because people can actually lose money because of ransom malware. 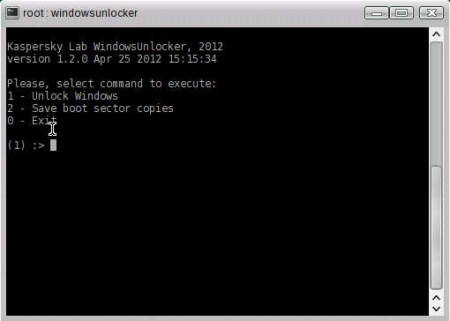 There’s no graphical interface for Windows Unlocker, what you see on the image above is pretty much everything that you’re gonna see. Since this small utility is designed to fix systems which are beyond repair, it’s located on the Kaspersky Rescue CD, which is a live Linux distribution from which you boot your computer and you have an actual system opened up for you armed with Kaspersky tools for malware removal.

The first step that you need to take would be to download the Kaspersky Rescue CD which is free. Size of the download is a bit bigger, around 250MB. There’s no way around this download, seeing how Windows Unlocker is only available from the rescue CD. Download should consist of a single image file. Use a CD burner and burn it to a CD, after which you’re gonna have to boot your computer from that very same CD. You’ll be notified when your computer is starting when to tap a keyboard key to select the boot device priority. 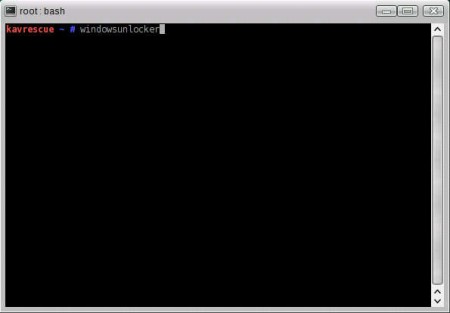 Once that the system opens up, run the Terminal from the menu, and there type in “windowsunlocker” which is the command that’s gonna start Windows Unlocker. Once you type it in and hit enter you should see what can be seen on the first image above. There are three options to choose from:

You should type in number 1 and hit enter. That’s gonna start the scanning process which is gonna look for errors on all the partitions of your computer. All the systems present on your computer are also gonna be checked and fixed, for example if you have several versions of Windows running on the same machine, Unlocker is gonna scan registries on all of them and fix them all automatically: 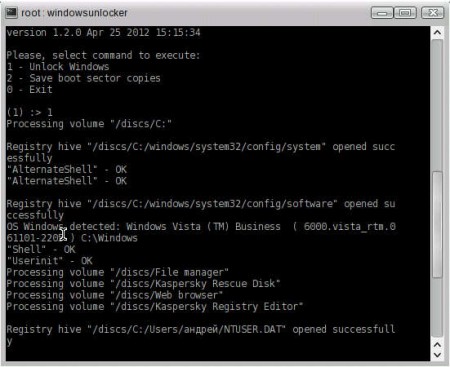 After the scan is completed you’ll be able to open a report file where all of the detected registry infections and fixes which were applied are gonna be listed. Report files should be located in var >> kl or var >> tmp. Once you check out the log, it’s time to restart and keep your fingers crossed that Windows Unlocker helped out.

With ever increasing amounts of malware that exists out there, even the slightest error in judgement, run the wrong file, click the wrong link and you end up infected. In these types of situations you can always reinstall the system, but that could be very time consuming. Kaspersky Windows Unlocker might help out. It’s a bit difficult to handle, but it does the job as advertised. It’s free, try it, see how it can help, if it did, then great, if not keep looking for a file scanner. Free download.