BMP is a free audio player for Linux and BSD which you can use in order to play pretty much all of the common audio formats that we come across each day. This free audio player is a clone of Winamp, where not only that you get the same kind of interface, themes that you use in Winamp can also be used in BMP. But you get the same audio format support and pretty much the same work flow to the older versions of Winamp, when it wasn’t as complex and bulky as it is now. 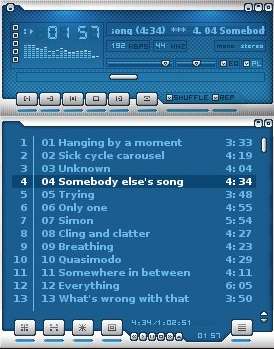 Like we already mentioned, BMP has pretty much the same type of interface that its Windows counterpart had back in the day. Even though you can still use this new retro interface in Winamp, by selecting it from the menus, by default modern versions of Winamp come with a very complex interface with album art fetching, library manager, and what not. BMP on the other hand is focusing on keeping things simple. You still get media player controls, equalizer, and playlists, just not in the extravagant and resource consuming package, which is the case with Winamp.

Linux and BSD users who have at some point used Windows or are using Windows alongside one of these systems have probably wondered if they could enjoy in something similar to Winamp on Linux and BSD. Now with BMP, not only that you can enjoy, but you actually get pretty much the same thing that you get with Winamp. Let’s see this free audio player in action.

How to Listen to Music with BMP free Audio Player for Linux and BSD?

New songs can be imported to the list by clicking on the first Add Files icon from the four which can be seen at the bottom of the playlist, see image above. This will open up the browse for files window where you can either select individual songs and have them imported like that or you can select the music folder which will automatically import the entire collection. Equalizer is also available. Start it up by right clicking on the main playback control window and from there selecting Equalizer option. In that menu you can also select Preferences to open up the player options.

There you can also change theme, in the image above we changed the theme and we activated the equalizer.

BMP is a very lightweight, fast, and to the point audio player for Linux and BSD. Everything you need for playing music is available right after installation. Format support is great, and the interface isn’t very intrusive. What more could you ask. Download it absolutely free.

You may also try AIMP 2 and Vinyl reviewed by us.