TunesBag is a free online service which allows you to play music that you have stored inside your Dropbox account. Songs can be played directly inside the web browser, or you can install TunesBag client for one of the numerous supported platforms, including iOS. Songs will be streamed directly from Dropbox, without downloading them or anything like that. 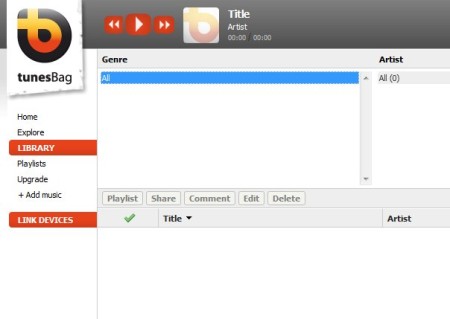 Screenshot above shows us the web control panel of TunesBag, The control panel of this free Dropbox music streaming service looks like any other music player. At the top we have the standard playback controls with album and artist information preview. In the left sidebar we have a menu for accessing various different music player controls like playlists, library and so on. Rest of the interface is reserved for song categorizations on genre, artists and albums, while down below you get the actual song list. Key features of TunesBag – free online Dropbox music streamer are:

Features that we listed above are available in the free version of TunesBag. There’s also an option for a paid upgrade to a pro account where you get up to 200GB of storage for your songs. That way you can avoid Dropbox altogether. To use the desktop client, you’re gonna have to have Adobe AIR framework installed on your computer. Here’s a few pointers to help you get started.

How to stream and listen to music directly from Dropbox

TunesBag requires you to register on the website in order to setup the web player. Login with various different social networks is also possible. Once that you’ve registered the account, you’re gonna have to connect this free Dropbox music streaming service with, well with Dropbox. 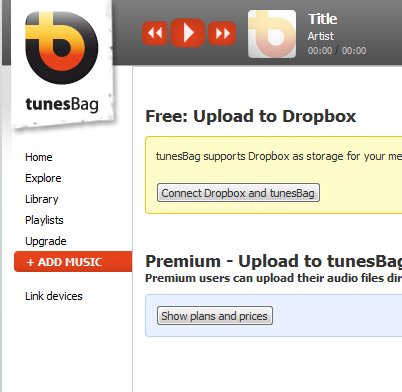 Select the Connect Dropbox and TunesBag button, login into your account, select the folder where songs are located and that’s it. Switch back to the Library and there start arranging playlists. To listen and stream music from Dropbox on your desktop or iPhone, you’re gonna have to install TunesBag client. 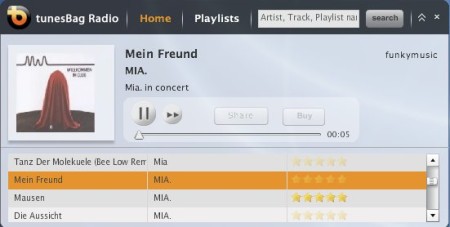 Client works as a radio player, only it will play music that you have stored inside your Dropbox account. Remember you need to have Adobe Air installed in order to use TunesBag desktop client. For iPhone and iPad you can find the TunesBag app on iTunes.

TunesBag is perfect for all those who would for example like to listen to their favorite music at work, or anyone else, without having to carry storage with them. Simply upload music and albums to your Dropbox account, up to 500 songs can be added, and streamed anywhere, anytime. Give it a try and see how it goes. Free download.