Here are 5 free iPhone Sudoku apps for those who like to take brainstorming challenges. Indeed Sudoku is easy to learn but playing it is much harder. The days are gone when people used to pick up the daily newspaper looking for Sudoku. These Sudoku apps for iPhone bring the most popular puzzle game of all-time to your iPhone. Lets get into details of each iPhone Sudoku app. 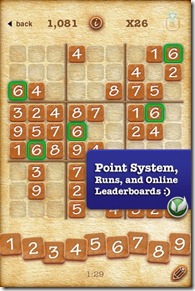 Sudoku 2 is an excellent Sudoku app for iPhone. Users can switch the look between the classic and the sand tile theme. To win the game, the user has to solve the puzzle with 3 or fewer errors. We can take help from Hints in the app. Easier difficulty level has more number of hints available while in extreme hard levels there are only a few hints for our help. The gameplay is challenging. You have to win puzzle consecutively to unlock more levels. With Open Feint feature, we can look at global leadership board. There is a multiplier in the start of the game. The multiplier value decreases with time. So, the user solving the puzzle in minimum time will get the maximum multiplier.

Android users can check out Android Sudoku Apps reviewed by us. 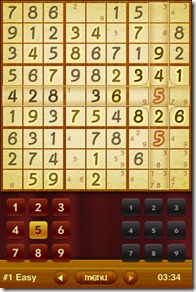 Sudoku has a got a nice graphical interface and a total of 3,000 puzzles to test our brain.  This free iPhone Sudoku app also has the Open Feint plugin for online leadership scoreboard. The ranking is based upon the scores. Scores are awarded on the basis of difficulty level, time taken to solve the puzzle and the density of help taken to solve the puzzle. With early error checking, we know that the value we entered is correct or incorrect. The Sudoku app for iPhone consists of 5 difficulty levels and a Smart Note feature to roughly fill the puzzle to reduce final errors.

iPad users should not miss to check out iPad Sudoku Apps reviewed by us. 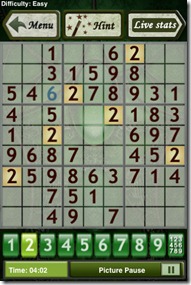 Tap Sudoku is a great app for playing Sudoku on iPhone. This free iPhone Sudoku app has got some nice and rare features. The Sudoku app for iPhone allows us to create our own boards and puzzles. Saving the game in progress and playing it later makes Tap Sudoku more worthy. Users can change the look anytime with a list of skins to choose from. If anything goes wrong, the Undo till Solvable button brings us back again into the puzzle. Other feature include timer, advance error recognition and game customization.

Also, check out other iPhone apps reviewed by us. 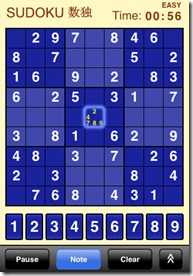 Sudoku Free give a great challenge with its four difficulty levels. But the puzzles in this iPhone Sudoku app are not of extreme difficulty. They can be solved by any regular guys. Hints make the puzzle solving task more easier. With error checking, the wrong entries are displayed in red color. The board color can be changed to your own favorite color – blue, red, yellow, etc. Sudoku Free also has Smart Notes feature. 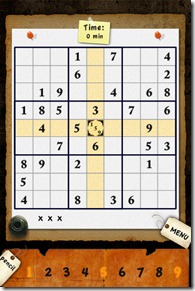 Sudoku II Free is a nice free Sudoku app for iPhone. The graphics are at its best. This free iPhone Sudoku app has a never-ending gameplay of 50,000 different puzzles. The rough filling can be done with Pencil and the final entry with Pen. This Sudoku app is for those who are looking for a stylish and simple Sudoku app.