Here are top 5 free launcher apps for android. You can replace your stock launcher with any of these apps. These apps replace your homescreen and application drawer with a new customizable one. Moreover you can also change the look & feel anytime with additional themes for these launchers.

Go Dev Team have been developing some of these excellent apps for android. These apps are replacement for stock apps found in android phone like Contacts, Dialer, Launcher, Locker, etc. Go Launcher EX is also a similar app designed to replace the stock launcher application. This launcher has 3D effects and can support a large number of homescreens. Pinch-to-zoom shows a helicopter view of all the homescreens. Go Launcher EX is very customizable with hundreds of free and premium themes available at the Android Market. And man! The ICS theme of Go Launcher EX is just awesome. Transition effects are highly customizable and this free launcher is packed with lots of features.

You can also check out other Android apps reviewed by us.

ADW Launcher is the same launcher being used in CyanogenMod as default launcher and some other unofficial ROMs too. This free launcher app is lightweight and easy to use & customize. Moreover, ADW Launcher is an open source app. Any user can modify it and re-tweak it in their own way. There are many free themes available in the market for ADW Launcher. ADW Launcher is rather simpler than being an eye-candy.

Windows 7 style launcher phones are trending in the market. And so does the app having WP style launcher. This launcher has a Metro UI style interface with tiles. Long press on a tile and move it anywhere. Tile colors are highly customizable. Tiles appear animating on the screen. Facebook integration is also a notable feature of this launcher. 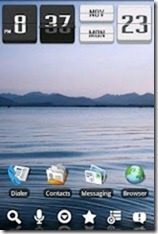 Home++ is another nice app with lots of features. This app reflects simplicity in a modern design. It supports up to 7 different homescreens. Home++ includes it’s own widgets like clock widget, calendar widget, etc. Third party widgets are also supported. However, the live wallpapers are not yet supported in this app as it is currently in Beta version. But this feature is coming soon in Home++.