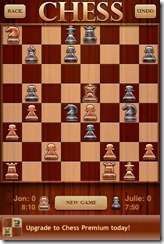 Chess Free might not be a good name but it’s the name of the most downloaded and rated chess app for both iPhone and Android platform. Game graphics are cool with a wooden theme. There are two types of gameplay modes – Single player and two players. In single player mode, we play against the artificial intelligence. The game difficulty is configurable. Undo function will alter your moves. The two player mode gives more fun playing against a friend. The board rotates after every move so that the other opponent can see the game similarly as the first one. Chess Free is ad-supported, and the ad-free version is priced at $0.99. Overall, Chess Free is a great game with nice graphics and polished sound effects with game  music.

Also, check out Chess apps for Android reviewed by us. 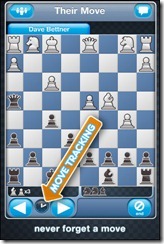 Chess With Friends Free is a social-friendly free chess app for iPhone. Users are needed to link the app with their Facebook account or Game With Friends account in order to play chess. The account setup is needed for multiplayer gameplay. Also it allows users to play Chess on Chess with Friends Free with Facebook friends. We can start a match against a friend or random opponent. The best feature in this app is that Chess With Friends Free allows users to play up to 20 games simultaneously. So, if you are a hardcore chess master, then you will like this app a lot. The Push Notifications will let you know when your turn comes in each game. Also, it allows us to chat with the opponent player with an in-built messenger. 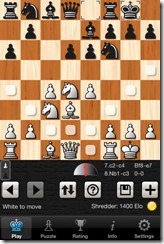 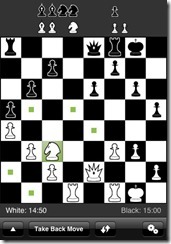 iChess Free is a simple chess game for iPhone with all the required features. It has 4 types of game modes – Player VS Computer, Player VS Player, Computer VS Computer and Online mode. It uses Free Internet Chess Server (FICS) for online gameplay. There are five difficulty levels in the game. The board and set pieces are highly customizable. 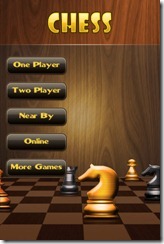 Chess Classics is a simple chess game with nice graphics. There are three difficulty levels in the game. It also allows two players to play through Bluetooth or on the same device. The online Game Center allows users to match against any person available on the Internet. Moreover, Chess Classics also support Chinese language.