Here are 5 Free Android Chess Apps for those who like to play brainstorming games. Chess is undoubtedly the most popular board game played by people belonging to any age group and nation. Lets explore the chess for Android in detail. 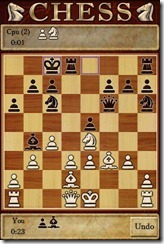 With rich graphics and challenging gameplay, Chess Free is the most downloaded free chess app for Android with over 5 million downloads. This Android chess app uses Treebeard chess engine. This engine is the same one used by the Microsoft MSN Chess game. There are 10 difficulty levels in the game.

For Chess Board customization, there are 3 sets of board and chess pieces. A unique feature of Chess Free is Review Game Mode. In this mode, we can see each single move of the last played game in detail. This free Android chess app is ad-supported. Advertisements are rare and do not affect the gameplay. Advertisements can be removed by purchasing the ad-free version costing $0.99.

Also, check out other Android apps reviewed by us. 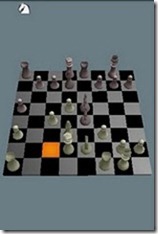 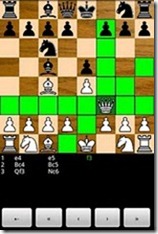 Chess for Android is a good Android chess app for playing multi-player game. This free chess for Android supports XBoard and WinBoard Engines and Universal Chess Interface (UCI). Users can also add their own engines to the game by installing them from a file located on memory card or by Import Engine option.

With enhanced gameplay, the moves can also be controlled by trackpad or keyboard, other than touch-screen. User can take part in engine tournaments for a multi-player experience. Overall, Chess for Android has a lot of features and a decent gameplay. 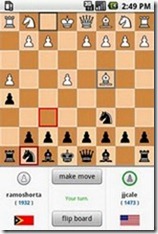 Each player in this game has rank based upon his performance in the game. At the time of first play, user has to enter his name and country. By this other users can see your profile online with your name and nation flag along with playing history and ranking. So you can always know who your opponent is, to which country he belongs and what is his experience playing this game. The only con with this Android chess app is that it is limited by only 50 moves per day. Also it is ad-supported. If you are a heavy gamer than you are needed to purchase the premium limitless version of ChessPresso.

DroidFish Chess is an excellent free chess for Android. This chess app for Android is highly customizable. The Android chess app supports Scid Database with Scid on the go. The board color can be changed. The engines are also highly configurable. DroidFish Chess also includes multi-player mode and Analyze mode. Along with importing and exporting PGN, it can also be edited with DroidFish Chess.