Here, are 5 free Sudoku apps for Android that will exercise your brain. For a better developed brain, you can select a more difficult level puzzle to solve. Sudoku is a stimulating and difficult mind puzzle. Once you understand the logic Sudoku becomes a regular brain exercise. Lets get into details of each Android Sudoku app. 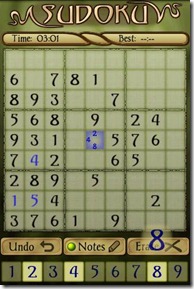 Sudoku Free is one of the most common Sudoku apps for Android due to its popularity and the colorful Japanese style interface. Obviously, this free Android Sudoku app is the most downloaded one on Android Market. Users can choose a puzzle from 5 difficulty levels with a total of 750 puzzles. Undo and Numeric buttons are located at the bottom part of the screen aligned in a stylish way. Users can always track their fastest completion time, average completion time and completion %age for each level in Sudoku Free. If hanged at a puzzle, use the Hint option to get an aid in solving it. Sudoku Free is ad-supported, and the ad-free version costs $0.99.

iPad users can check out Sudoku iPad Apps reviewed by us. 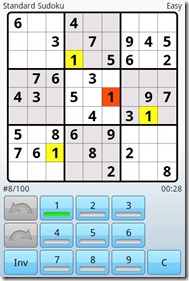 Super Sudoku is a nice Sudoku app for Android with a simple, modern style look and the best fact is that this free Android Sudoku app is ad-free. No purchases required to get ads removed. This Sudoku app looks like a polished version of other simple Sudoku apps. There are 5 difficultly levels with 6 screen variations like Percent Sudoku, Colorful Sudoku and Hyper Sudoku. Undo/Redo and Numeric button are placed below the board in a separate section.

Do not miss to check out other Android apps reviewed by us. 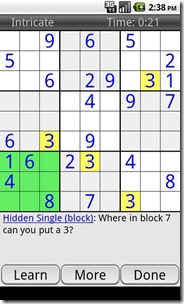 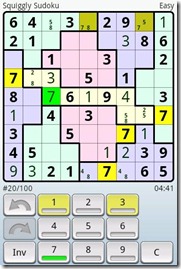 Andoku Sudoku has a User Interface similar to Super Sudoku app. Just the on-screen buttons color is different in both these apps. There is a 10 type of game variations with 5 difficulty levels per each variation. Each variation and level has 200 different puzzles. In Andoku Sudoku, we can combine two existing board presentations to make a new combination like Sudoku-X + Squiggly Sudoku. Other features of this Sudoku app for Android include Undo, Redo, Auto-save and Statistics tracking. 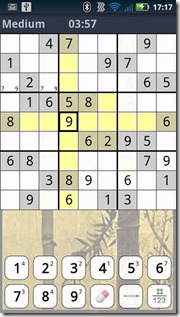 Sudoku Free is an excellent Sudoku app for Android. After recent updates on Jan 12, this app is one of the hottest trending apps on the market. The developers have changed the button layout and the new background painting makes the game more classic. There are 4 difficulty levels. We can also take help with Hints feature. Sudoku Free is also an ad-supported app. The ad-free version is priced at $1.99.