Monster Fight is a free and fun Android game app. You have to kill monsters by tapping on them as they pop up from holes in the ground. Single taps cannot kill every type of Monster. It needs skill to kill these naughty monsters. Some need to be tapped twice, some jump when they are tapped on and sometimes even their babies and twins appear. Kill many monsters as quickly as possible. Avoid tapping on other things like plants or you lose a heart. Also, collect hearts, coins, and rabbits to unlock more levels.  Have fun playing the challenge mode or the endless mode. 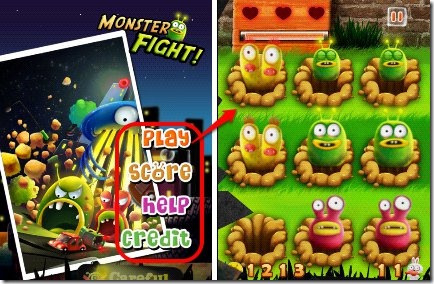 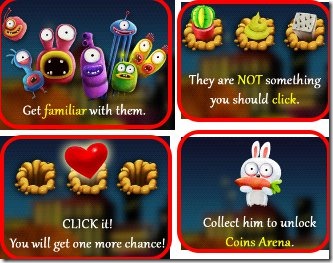 How to Kill Monsters With Android Phone :)

Download and Install Monster Fight Android Game App using the link or QR Code given at the end of the review. When you open the app, you will get options to Play the game, Check your scores, get Help on how to play the game, and View credits of the game.

Click on Help first, to get an idea about all the monsters and their special skills. You do not need to memorize how each monster will behave when tapped on, as this will be instructed to you before each monster is first introduced in the game. Just remember the things you are not allowed to touch in this Android game. Now click on back from the upper right corner of the screen.

To start playing Monster Fight Android game, click on Play from the main page of the game app. You will find three scenes, plus a Coins Arena, and an Endless mode. Initially only scene one can be played. You have to unlock all others by collecting coins. The mini games in the Coins Arena can be unlocked by collecting cute small rabbits that hop on the screen between the each game level. More and more levels are unlocked as you play the game. Be sure to collect hearts, and kill the monsters. 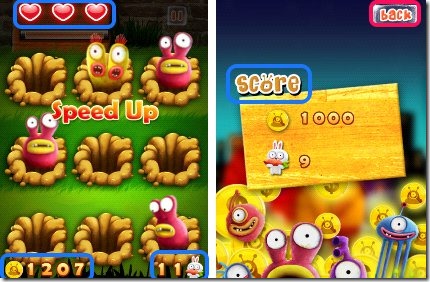 You can also play this fun Dots Game for Android, reviewed on our website earlier.

My Verdict on the App:

Monster Fight is an addicting Android game that you can play for fun purposes anytime anywhere. You have to kill the monsters with different kinds of taps and collect hearts coins etc. in the process. It is a very cute game and has nice animation, too. I love this Android game.

Scan the given QR Code to get Monster Fight on your Android device.