SnapCrab is a free screen capture tool that lets you take screenshot of any part of the screen with one click and save the screenshot in JPG, PNG, or GIF format. It embeds a tiny toolbar on the screen that comprises of all the tools. Even though the toolbar is small, it is highly powerful and feature rich.

This free screenshot software has the ability to take screenshots of the entire desktop screen as well as of specified areas or windows. It also lets you capture web pages right from your browser simply by linking with Sleipnir. You can preview the captured area in magnified display. It has the ability to capture screenshot at a specific time, by using self-timer feature. It lets you directly post captured screenshots to Twitter, Facebook, Flickr, or save them to Evernote. You can reside the screenshot capture application either in System tray. 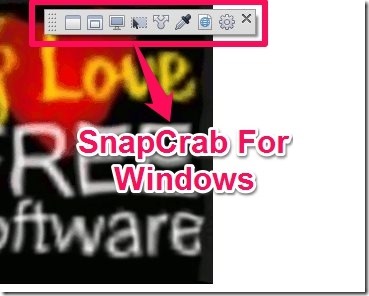 SnapCrab offers you variety of settings, which you can use to customize the hotkey, capture area, destination folder, image format and much more. Not only that, it lets you open screenshot via any other default application, so as to edit further. Another additional feature of this freeware is that, it offers color pick option, that lets you determine the RGB value of any color on the screen. Features of this screen capture tool are quite similar to Gadwin PrintScreen, but features like self-timer, directly post to various social networking sites, or the ability to capture webpage make it different and better than many similar tools that we reviewed earlier.

SnapCrab is a powerful free screen capture tool that can be grabbed from the link given at the end of this article. As soon  as you install this freeware, a small Toolbar gets embedded on the screen. This toolbar provide you all the capture options on the interface itself. 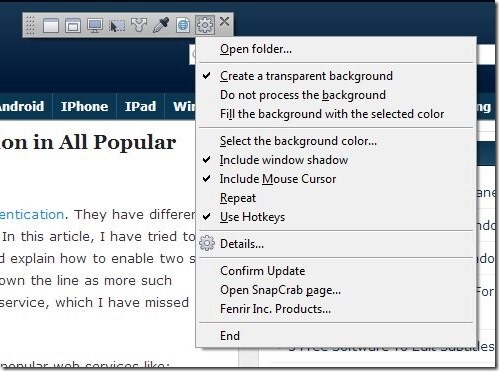 As I mentioned earlier, this freeware quietly resides in your system tray from where you can access the required action. You can simply right-click on the SnapCrab Icon located in the system tray to view important actions.

As soon as you choose the screen capture mode, it displays a magnified preview to the bottom right of the desktop screen. It creates a translucent layer on the screen while selecting the specific area. 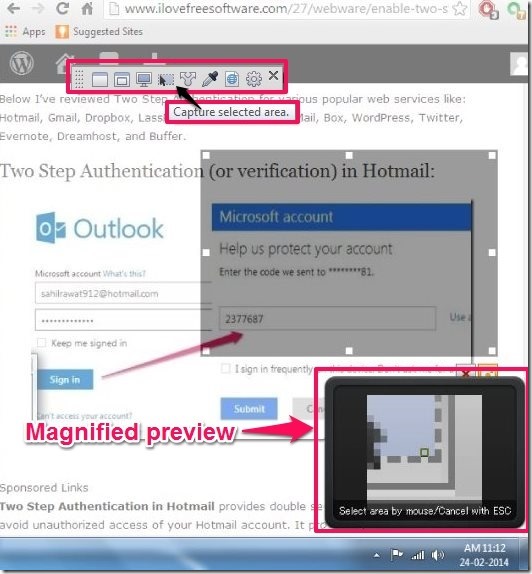 You can access the “Details” options to custom set the preferences. You can choose the destination, image format and filename of the screenshot. It also provides you option where you can directly open your screenshot in any image editing software. Using the “Hotkey” option, you can set the hotkey for various actions. 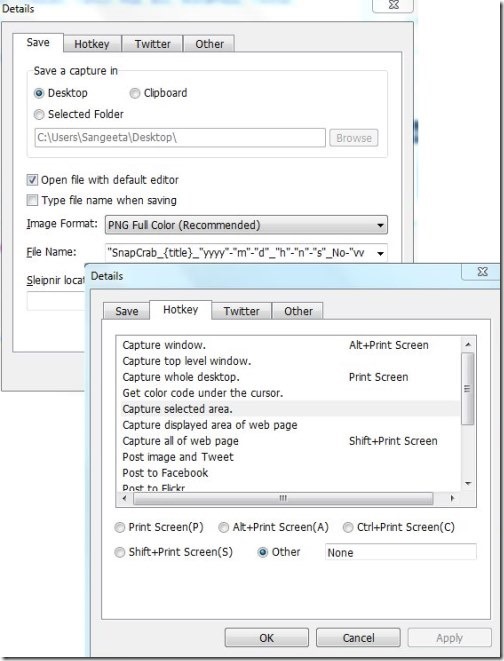 Twitter option can be used to sign-in Twitter account, so as to share screenshots directly with one click. Plus, you can choose the desired Image Sharing Service, that suits your convenience. The best part of this feature is that, you don’t have to fill annoying sign-in details each time. 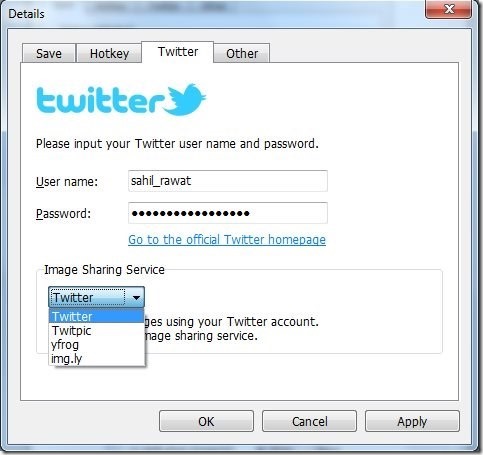 Using “Others” option, you can customize the color picker, dimension of the screenshot, and Reside & Run preferences. Not only that, you can also enable sound, or use self-timer by adjusting the time in seconds. 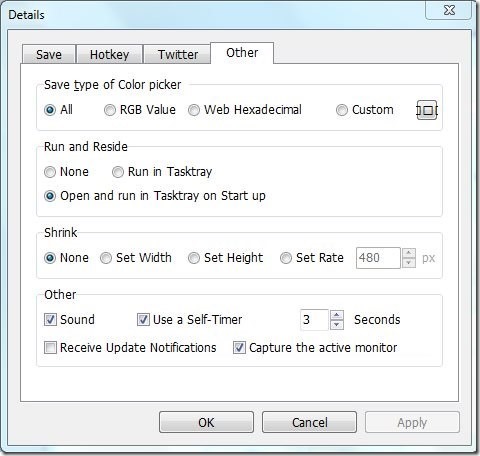 Ultimate powerful features of this free screen capture tool will definitely meet up all your needs.

SnapCrab is one of the best screen capture tool that I’ve come across. It’s powerful and extraordinary features make it worth having on PC.