FAST (File-Versioning and Syncing Tool) is a free synchronization application for syncing files and folders of various locations. It also lets you reverse the changes that are made to the files due to human error.

The free file versioning software will help in reversing the changes that are made to the files which are otherwise not reversible. Hence, file versioning will help you in getting back any versions of the file that you created previously by few clicks.

Some other file sync tools that we reviewed earlier are: File Synchronizer, Microsoft Sync, PureSync, SyncToy, and Dropbox. 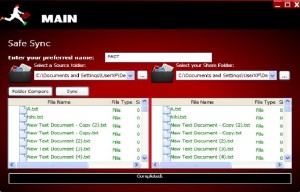 FAST is really a handy application that should be used by all. It easily lets you synchronize data between two computers through an intermediary storage such as a hard disk. During the synchronization process, FAST automatically creates copies of the earlier version of the files in the backup folder.

Another striking feature of this application is file versioning of any file. When we edit any document, we often make changes to it and when we close the file the changes are saved. Once saved and closed, we cannot get back the changes that we made before we closed the file. File versioning will let you access the previous versions of any file.

Here are some of the features of FAST: